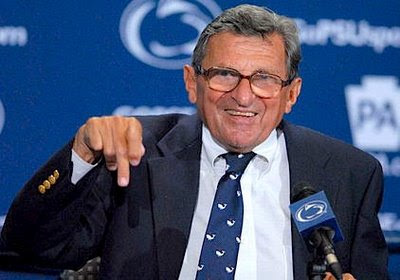 If you're looking for the runaway leader in off-field troubles, look no further than Penn State.

According to an ESPN study of Pennsylvania criminal records, 46 Nittany Lion players have faced 163 criminal charges since 2002 and 27 have been convicted of or have pleaded guilty to a combined 45 counts.

Joe Paterno, when asked about the disturbing numbers, told Steve Delsohn of ESPN's "Outside The Lines" that the network was on a "witch hunt."

The centerpiece of the "Outside The Lines" report chronicled an incident last year when several Penn State players forced their way into an apartment and attacked several people attending a party, including one individual who tried to break up the altercation and was knocked unconscious after being hit in the head with a beer bottle. While unconscious, police say the man was repeatedly punched in the head.

Paterno is entering the final year of his contract and the speculation continues that this season will be the last for the 81-year-old coach. After watching the "Outside The Lines" report, which you can view by clicking here, you have to think Penn State officials have had enough and are ready to send Paterno into retirement.
Posted by dawizofodds at 12:29 PM

If you're looking for the runaway leader in off-field troubles, look no further than Penn State.

Really? Where is your data on arrests and convictions for the other I-A teams?

I'm not defending the conduct of PSU's football team, but your statement is completely out of context. Maybe it's true, maybe it isn't, but please back it up with data rather than just blurting it out in a vacuum.

Ditto. I would venture to say that Miami has got to be somewhere in the running. Ohio State just had a guy arrested for a DUI as well.

Just because ESPN says something, doesn't mean it is necessarily true.

A lack of institutional control. Plain and simple. Pathetic.

I love how people like Kevin are dumb enough to think Miami guys get arrested like they do in the 80s. That is an ESPN myth. People are so easy to manipulate that it's sad. In the past 8-10 years, I can maybe count on one hand who has gotten arrested from Miami while on the team.

Another factor that no one at ESPN has taken into account is that fact that the State College police take a VERY hard line against anything Penn State.

Walk down College Ave drunk on a Saturday night, minding your own business, not hurting anyone, and you could easily wind up in jail with 3 or 4 charges against you. PSU students, football players or not, are given NO slack by the local cops. Do you think that's the case in Miami, or Columbus or Ann Arbor or L.A.? I'm sure that the police in bigger cities have better things to do than hassle college students about offenses that would be considered minor anywhere else.

If you want to see the data on other D1 teams you need look no further than the Fulmer Cup, which gives teams points based upon criminal activities. PSU finished second in the rankings in 2007 and is currently 8th in 2008. Overall, they rank 3rd among D1 schools since the rankings started.

In other words, when you compare PSU to other D1 schools they come out look pretty damn dirty. That's the facts, not some witch hunt.

And PSU players are not simply getting arrested for public drunkeness. We're talking serious violations, so trying to excuse this as some aggressive local police force is bogus.