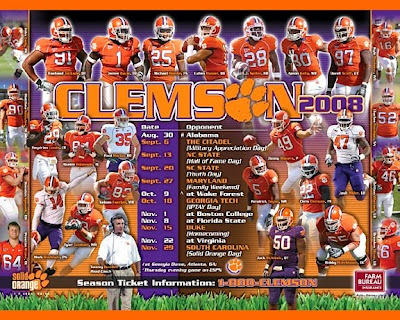 Starting today, we're adding a second critic for the review of poster schedules. Why? Because he kept pestering the hell out of us to do it. Making the situation somewhat awkward is that our two critics share the same first name — Mike. At first we considered this some stroke of blogging genius. Then somebody reminded us that there's a national radio show on a four-letter network with two guys named Mike. Oops.

Our hope is that this will give each team's effort a fair and balanced look. ... Fair and balanced. Seems like we've heard that one before on some three-letter cable network. Oh well. ...

Today's Clemson poster was sent by Tim. I know, you thought we were going to say his name was Mike.

Let's see what reviewer Mike — the original Mike who has been doing a stellar job, by the way — has to say:

"Apparently the message is 'Clemson Football — we are fielding a full squad in 2008' because it looks like the Tigers are trying to show every player on the team. Did they miss any walk-ons?

"Talk about a cluttered mess. Nothing stands out or catches your eye, making it difficult to focus on anything. Apparently the Tigers want to turn the poster into a king of 'Where's Waldo' to find the schedule.

"I also think it is interesting that on many posters, the coach is prominently displayed but here Clemson kind of hides Tommy Bowden. Hmmm.

"Clemson has some really cool traditions: Howard's Rock, the run down the hill ... and this is what the Tigers came up with? I am not a fan."

"Clemson is unable to settle on any one or two stars, so it put 27 (!) players on the poster, along with Tommy Bowden. I am going to re-read the Da Vinci Code tonight and try and figure out the hidden meaning behind 27 and will get back to you.

"Did a double-take of the first game on the schedule to make sure it wasn't Alabama State or North Alabama. Credit the Tigers for opening against a Southeastern Conference opponent. Other than the annual rivalry game against South Carolina, Alabama is Clemson's first nonconference opponent of note since 2005 when it opened against Texas A&M."
Posted by dawizofodds at 7:03 AM

What's with the one blue jersey guy? The poster smells of too much coaches input. I'll bet the designer had something slick put together and some graphic design/marketing "expert" on the coaching staff nixed it. This caused the designer to say, "Screw it. You want 85 guys on the poster, here you go!"

That is a purple Jersey. Clemson Occasionally wears all purple jerseys...I sent this poster in, and am a huge Clemson fan, but I agree that this poster is not very good. The sad thing is, they have looked this same way for a few years now.

well honestly if you are Clemson and you are pretty much selling out every single game how much effort do you really need to put into the poster?