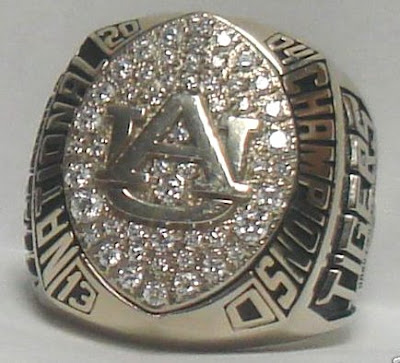 Nothing gets past the sharp eyes of the gang at Losers With Socks. While cruising a post on the Orlando Sentinel's On Campus blog about various rings up for auction on eBay, Patrick Donohue of Losers With Socks noticed a ring from Auburn among the collection.

Upon closer inspection, you will see "National Champions" on the Tigers' ring, which honors the Tigers' 13-0 season in 2004.

The Bowl Championship Game that season featured USC and Oklahoma, with the Trojans winning, 55-19. Auburn was screaming beforehand that it was left out of the title game after playing a nonconference slate of Louisiana Tech, The Citadel and Louisiana Monroe — all at home, of course — and squeaking past Virginia Tech, 16-13, in the Sugar Bowl.

Oklahoma did slightly better in nonconference, playing Oregon, Houston and Bowling Green — all at home, of course — in going undefeated during the regular season.

USC played Notre Dame, Brigham Young and Colorado State in nonleague games, with the BYU game on the road. Of note here is that USC won at Auburn, 23-0, in 2003.
Posted by dawizofodds at 7:03 AM

Utah should make these too. Their 2004 roll deserves a ring. In fact, all undefeateds should print banners and tshirts. If the regular season is a playoff, an unbeaten team is a champion.

Sorry but I don't see the importance of noting that AU played USC the YEAR BEFORE.

If you wanted to add credibility you should mention that USC played at VT for theit first regular season game in 2004, you know the same year AU played VT in the post-season, which resulted in a 24-13 W for USC then a 16-13 W for AU.

One thing is for sure Oklahoma did NOT deserveto be there...THANKS BCS!

Just like Illinois in the Rose Bowl (THANKS TRADITION)

and Hawaii in the Sugar Bowl (SORRY MIZZOU)

Another key fact worth mentioning: USC played Virginia Tech at the beginning of the 2004 season and beat them 24-13. Auburn barely squeaked by. Not an exact science, but more proof the Tigers weren't the best team that year.

Anonymous said...
"Sorry but I don't see the importance of noting that AU played USC the YEAR BEFORE."

Well, it is the best you can get to head to head. The AU teams of 2002 and 2003 that USC defeated were highly ranked at the time of the games.

And regarding that NC ring....
"most prominently being awarded the Fanspoll.com People's National Champion title".

There ya go. Not to take away from, the kids' efforts, they didn't choose the schedule - the coach's did.

There was a very questionable (ie bullsh*t) pass interference call at the end of that USC vs. VT game that helped USC score the go ahead TD that helped them win that game. So that is not really proof against Auburn not being the best team that year. I feel cheated not because I am an Auburn grad in 04, but because the best two teams did not play for the NC in 04. Maybe this year Auburn and USC wil make it to the big game! WDE!

It wasn't so much that Auburn "barely squeaked by" Va Tech in the Sugar Bowl as it was Auburn inexplicably shut it down and allowed Va Tech to score a couple meaningless scores at the end of the game. You know, the same way we let bammer score those late touchdowns and kick the onsides the past few years - just trying to squeeze another year out of the Shula regime.

USC beat Va Tech in the first game of the year...before Tech settled in and became a top 5 defense, like Auburn...

Oklahoma didn't have a good defense at all and was totally exposed. Auburn probably would have lost, but it would have been MUCH more competitive than 55-19.

I'm not sure I know what Auburn is. I may have seen one of their games, not sure.

You forget that Auburn beacame the first team in the history of college football to beat 5 top ten teams that season (LSU, UGA, TN twice, and Va Tech) while Oklahoma only beat one. After the season the NFL recognized AU's strength by drafting three players in the first ten picks and 4 overall in the first round.