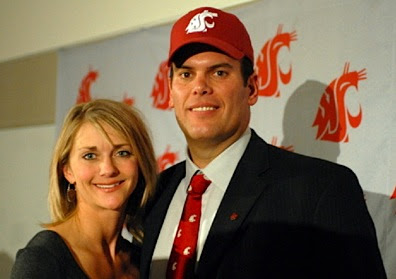 If Paul Wulff was looking for a challenge, he found it at Washington State, which has had an astonishing 25 players arrested or charged with offenses in the past 18 months.

Among the incidents:
Wulff, who has been the coach for only six months, also lost eight scholarships because the Cougars failed to meet NCAA academic standards in 2006-07. Former coach Bill Doba kidded Wulff by saying, "Just blame it on me. I'm gone."

But recruiting the right players to isolated Pullman — population 27,030 — might be Wulff's biggest challenge.

Courtney Williams, a defensive back from Los Angeles who left because of academic problems, said: "WSU is a hard school to go to, man. You ain't got nothin' to do but get drunk and smoke weed, and not go to class because you're too tired from doing what you're doing."
Posted by dawizofodds at 11:03 AM

I've been to Pullman and as former basketball coach George Raveling perfectly described it: "It may not be the end of the world but it's pretty close."