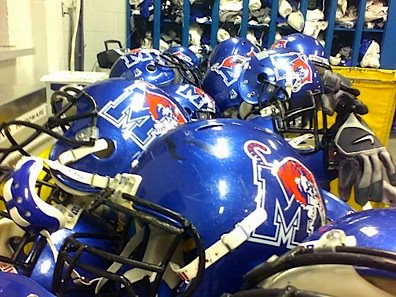 Memphis officials have been "in serious talks with the Big East about joining the conference," according to Matt Stark of WHBQ-TV in Memphis.

Stark's report is based on unnamed sources and offers no other details. Earlier this week, a column by Desmond Conner of the Hartford Courant suggested that East Carolina had expressed interest in joining the Big East, which has only eight football playing members but a full slate of 16 teams in basketball.

Memphis, like East Carolina, is a member of Conference USA, the league the Big East raided in 2003 after losing Virginia Tech, Miami and Boston College to the Atlantic Coast Conference. Louisville, Cincinnati and South Florida were the football playing members of Conference USA that jumped to the Big East.
Posted by dawizofodds at 7:00 AM

Bring back the Metro!

Pirates would be great for football but gawd awful for baskets.

oh yea, the Big Least allows you to pick and choose what conference or division, for that matter, you want to play in!!

However, Memphis' AD (RC Johnson) is denying these reports have any truth to them.
Here's the loop hole, some rumors in Memphis have said that FedEx executives are the ones lobbying for this on behalf of the school, so the school can deny any negotiations until it's a done deal.