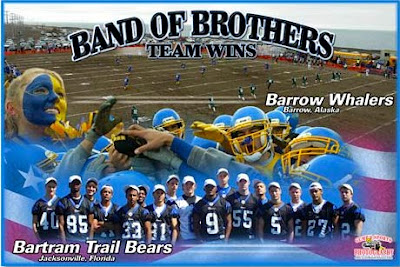 It started on July 23, 2006, when a reader named John sent a link to an Anchorage Daily News story detailing plans for Barrow High to start a football team. The next day, Wayne Drehs read our post and a few weeks later, the ESPN.com writer and a film crew were 330 miles north of the Arctic Circle, covering the northernmost football game ever played.

The two-part story (video below) was featured on ESPN in October 2006, and a woman in Jacksonville — over 5,000 miles away — was so inspired after watching it that she started a movement to replace Barrow's gravel field with artificial turf. Cathy Parker's Project Alaska Turf became a smashing success and last August the Whalers, after a training camp in Jacksonville with members of the Bartram Trail High team, played their first game on the blue field next to the Arctic Ocean.

The story is far from over. Parker is continuing her efforts and is raising funds for a Barrow football camp, titled "Band of Brothers." The camp, to be held in July, will feature members of the Bartram team. Details are on Parker's website. We can't think of a better cause.

Posted by dawizofodds at 3:53 AM