His Chances of Rejoining FSU Could Be Shot 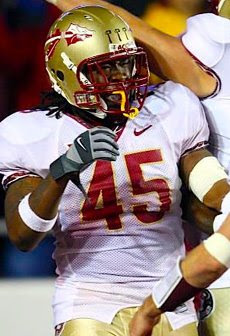 Tight end Charlie Graham started 11 games last season for Florida State before he was sacked because of academics and has spent this spring at Tallahassee Community College trying to regain his eligibility.

On the night of May 15, police were called to Graham's apartment. A neighbor said someone was outside the residence firing a gun into the air.

Officers arrived and questioned Graham and a companion. According to the police report obtained by Scott Carter of the Tampa Tribune, "Mr. Graham was intoxicated and celebrating being eligible to play college football again."

Graham acknowledged firing a gun into the air and was cited for discharging a firearm within city limits (in this case, less than two miles from Doak Campbell Stadium). He also had his .32-caliber semi-automatic weapon and a rifle confiscated.

In the wake of receiver Preston Parker's arrest on gun and drug charges, Graham realizes he might have a problem rejoining the team.

"Everything school-wise is going great," he said. "Technically, I'm not on the team. I'm not even enrolled at Florida State, but if punishing me is what they want to do, then I have no choice, because I made a stupid choice."
Posted by dawizofodds at 12:42 AM