BCS Evil: Plenty of Blame to Go Around 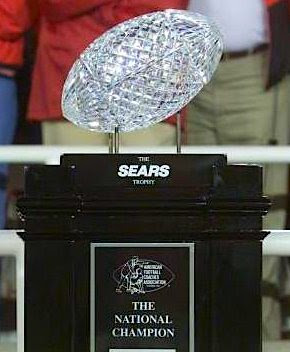 It turns out the Big Ten and Pacific 10 were not alone in putting a stop to a proposal for a "plus-one" Bowl Championship Series playoff.

A proposal by Southeastern Conference commissioner Mike Slive would have put the top four teams in the BCS standings in a playoff, but the measure never had a chance.

As Chris Dufrense of the Los Angeles Times wrote, "This was as predictable as Duke losing a football game."

Also expressing concern about the proposal were the Big 12, Big East and Notre Dame.

Bottom line: There will be no playoff until 2014 at the earliest.

Conference commissioners say the game has never been better. And really, who can disagree? Consider that two more bowls have been added — the Congressional Bowl in Washington and the St. Petersburg Bowl — bringing the postseason lineup to a whopping 34 games. That means virtually any team that can crank out a 6-6 record will be headed to the postseason. Yes, it's worse than the NHL or NBA playoffs.

What incentive is there for the Big East to support a "plus-one" format? The eight-team league now has seven bowl tie-ins.

The formula for success is simple: Line up the nonconference schedule with home games against the likes of Tennessee Tech, Maine, Wofford and Villanova, ensuring four victories. Then grind out a 2-6 conference record and presto — you're bowling!

Who says the game has problems?
Posted by dawizofodds at 3:58 AM

College Football ratings are up, revenue is up, popularity is up. If its not broke, don't fix it.

I am of the opinion that what makes the regular season so exciting is its a defacto playoff itself.

"Also expressing concern about the proposal were the Big 12, Big East and Notre Dame."

I didn't realize Notre Dame was a conference. FUCK ND!!!! Why they have a say in anything is beyond me. Why doesn't Baylor, Tulsa, or Vandy have a vote then. I hate the Pac10 and Big 10 love affair with the freakin' Rose Bowl. How about this. Invite them to play (if they qualify) in some sort of playoff and make them choose the MNC or their beloved Rose Bowl.

"Conference commissioners say the game has never been better. And really, who can disagree?"

Anyone who cares about football more than ad dollars, actually.


"I am of the opinion that what makes the regular season so exciting is its a defacto playoff itself."

You can think that if you'd like, but you're categorically wrong. In a playoff, winning all of your games means winning the title. Losing a game means being out. You don't have to look back very far to find undefeated teams without titles or 1 and 2-loss teams who have won the whole thing. "The regular season is a playoff" is bullshit, plain and simple.

You know what the perfect counterargument to the braindead hacks who say "the BCS is great!" or "The regular season is a playoff!!": Look at the uproar constantly going on in college football of people BEGGING for a playoff. Now, tell me what would happen if you went to the NFL and said, "you know what would make your league better?--Take away the playoffs and just have polls determine the top two teams to play in the superbowl!!"; "It would be great! The games in the regular season would mean more!" See how much support you get for that.

To the mob full of morons,

Why do you think the season is so great? It is because there isn't a 16 team playoff where almost no games count in the reg. season. Next time, tell your team not to sux in week Stanford and win. Oh yea, sports is about making money, so yea, college football is going pretty well.

meatybob, go choke on a chode. When only 8 or 16 teams of 119 make the playoff, every game does matter. At least come up with a compelling argument against a playoff instead of regurgitating Kirk Herbstreit's bullshit.
It's pretty simple:
"College Football ratings are up, revenue is up, popularity is up. If its not broke, don't fix it."-purdue matt
This is the party line for college AD's, league commish's, and BCS execs. It is broke and here's why purdue matt: Purdue will never win a national championship as long as there is a BCS. Why? Because they send who they want to be in it. Hell they have sent two teams that didn't even win their conference.
If you aren't in the club(OSU,Mich,FSU,USC,ND,OU,etc.), you better be undefeated and praying. A playoff would let each and every BCS team start the season thinking they could win the national title...instead of the top 15 teams the sports writers have anointed in preseason polls.