No Shortage of Rivals for the Zooker 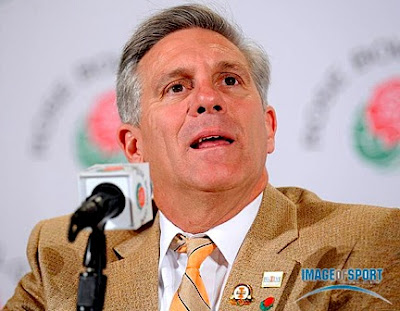 Are some recruiting websites merely recruiting vehicles for certain teams? That's what Ron Zook suggested last week during his criticism of the "Saban Rule." The Zooker said that some teams had secretly allied themselves with the websites as another way to communicate with recruits. The benefit for the websites is that they get better information, more traffic and make more money while helping their teams.

The editor in chief of one of those recruiting sites has fired back. Bobby Burton of Rivals.com says the Illinois coach is out of line. Writes Burton:

"The new rule has come about because of your profession's inability to work within the rules that govern them. Simply put, the NCAA doesn't want its head coaches going out in the spring because they don't trust you and your brethren.

Of course, some coaches have already found a way around the Saban Rule. Namely, Nick Saban.

Thanks to Image of Sport.
Posted by dawizofodds at 3:34 AM

Just watch: Rivals will downgrade the ratings of players who commit to Illinois.

i think zook was referring to a lot of shadow sites that copy Rivals info and are closer to the blog-type than a respected system like Rivals.