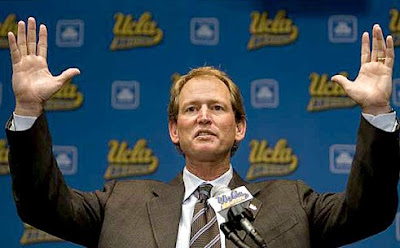 Imagine that. UCLA's players pulling a fast one on Slick Rick Neuheisel. It happened Tuesday, when the Bruins bolted from the practice field after going through stretching exercises.

In what has become a spring tradition at UCLA, players ditch out of one practice. Even Neuheisel participated when he was a Bruin quarterback. But now that he's coach, Tuesday's move was not welcomed.

"I don't want to make too big a deal of it. It is what it is and there are still plenty of days left in spring to get the improvement that we need."

Maybe not. The Bruins are likely to lose the practice day, one of only 15 allowed in the spring by the NCAA.

When the players ran from practice, Neuheisel went to the locker room. One player, who asked not to be identified, told the L.A. Times that Neuheisel asked the team not to ditch a practice before spring drills, promising to "make it up to us later."

As expected, the players are catching hell, even from the UCLA's student newspaper, the Daily Bruin.

Neuheisel planned to check with NCAA officials Wednesday to see if he can get the practice back. That would be one sweet phone call to tap into, Slick Rick calling the NCAA to try and get a practice back. Heh, heh. ...

Thanks to Gutty Little Bruins.
Posted by dawizofodds at 3:33 AM