Rivals, Scout at Heart of Next Scandal? 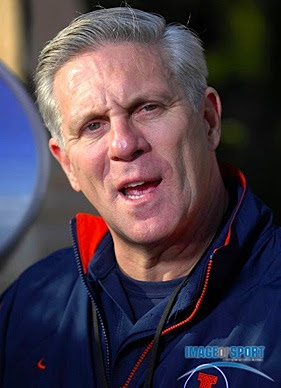 Count Illinois' Ron Zook among coaches who are against the new "Saban Rule," which prohibits head coaches from going on the road during the spring evaluation period from April 15-May 31.

Now throw the Internet into all of this and suddenly you have a bigger problem. Writes Lindsey Willhite of the Arlington Heights Daily Herald:

"Because operator/writers for Internet sites, such as Rivals.com and Scout.com, are the only ones who have unregulated access to recruits when coaches can't talk to them, it's an area that's ripe for corruption.

"Some programs have secretly allied themselves with the Web sites that report on their school as another way to communicate with recruits.

" 'Well, you know what a lot of them are saying. They're selling their school to these kids, and we're not able to talk to them. To me, we're losing this thing, in my opinion.' "

Thanks to Image of Sport.
Posted by dawizofodds at 3:54 AM

I understand he is talking about Chris Ard, who is the publisher for Clemson's Rivals site.

The recruit that was contacted by Ard was rb Jamie Harper from Fla, who signed with Clemson.

Oh, just STFU you bitter Gamecock fuckstick. Take your asskicking's like a man and admit your over the hill coach is gonna get you exactly what the last one got you. A big, fat DONUT.

He speaks the truth..Ard recruits players.

If the team sites are recruiting on behalf of the schools or coaches, then they are breaking the rules (wasn't Kentucky in trouble for this a while back?). So, the rules against what Zook is complaining about are already in place. What he's really pissed off about is that the Saban rule makes it harder for him to break the rules about contact (i.e., by bumping). Bottom line is that the assistants are still out there, so what is he really worried about? Notice he seems unworried about the effect on evalutions - which is what the spring is supposed to be used for (and is done primarily by assistants). Could it be that it is harder to get a kid you're not supposed to be talking to out of class when its some unknown RB coach, not the famous Ron Zook trying to do it?