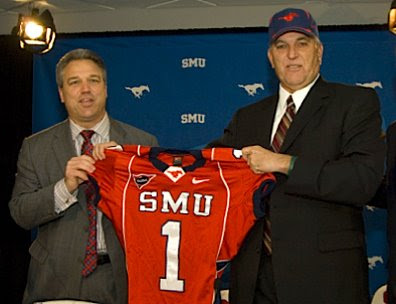 Southern Methodist has it all. A renovated stadium, two large practice fields, state-of-the-art locker rooms, offices and facilities. And it has money. Lots of it. Alums are not shy about flaunting their financial success. Bumper stickers on BMWs read, "My maid went to Texas."

What SMU doesn't have is a winning football program.

That's where June Jones comes in. He left paradise in Hawaii and a team coming off a 12-1 season for a 1-11 reclamation project in Dallas.

How did Jones end up at SMU? According to the Honolulu Star-Bulletin, it was the work of Eric Dickerson, who asked Jones in early December if he might be interested in a new challenge. Jones said yes and Dickerson passed word to Mustang athletic director Steve Orsini.

Four other coaches have failed to resurrect the SMU program after the NCAA handed down the death penalty in 1987. Now it's Jones' turn. He nearly left Hawaii in 2004 and 2006, but the timing wasn't right. This time it was different.

"I can turn things around," he said.

Posted by dawizofodds at 1:48 AM