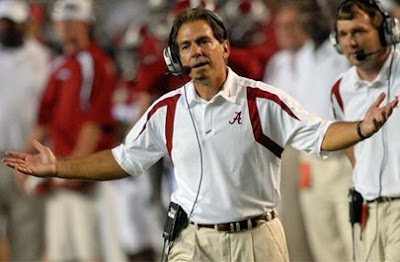 Terrific story out of Alabama, chronicled by Will Collier of From The Bleachers.

Last Saturday night, Gentry Estes of the Mobile Press-Register posted an item on the paper's "Bama Beat" blog discussing the frustration of attempting to cover an Alabama scrimmage he could not watch. After the scrimmage, Estes and other beat writers are merely handed statistics compiled by — you guessed it — team officials. If they're lucky, Nick Saban talks to them, but everybody else — players, assistant coaches, the mascot — are off limits.

"This is not an ideal situation for a journalist who values a balanced account, and it's worth disclosure and a warning to readers: Take it for what it's worth."

On Monday, Estes' entry was deleted, only to reappear Wednesday, but not the "Bama Beat" blog. It was posted on Paul Finebaum's site.

Finebaum interviewed Randy Kennedy, the paper's sports editor, on his radio show later Wednesday and asked him why the blog entry was removed.

"We just decided it was more trouble than it was worth … this was not necessarily the battle [Estes] wanted to pick with the people who were supposed to be our customers."

According to From The Bleachers, Montgomery radio personality Doug Amos was told by a source that the request to spike Estes' post came from Saban, who called the writer to complain.

But on Thursday evening, Estes re-posted the original piece, along with the following note, which stated there was never any contact from Saban or any other Alabama official regarding the original post:

"Two days later, after feeling compelled to respond to numerous comments from readers, the blog was threatening to become a time-consuming distraction to my work as Alabama beat writer for the Press-Register.

"This was a battle I began to feel would do no good for my newspaper or myself. I wish to be known for objectivity and reporting skills rather than a mere blog that made myself the story. This was heading in an opposite direction from those goals. So I deleted the post. Never at any time did anyone from the University of Alabama request or suggest that I remove the blog entry."

Thanks to reader George for his help.
Posted by dawizofodds at 4:35 AM

you're going to have to tell me which part is supposed to outrage me.

The last part of that is not true. Saban did call the writer. What was said, I do not know, but it is typical for what has been happening in the media around Alabama, Mobile likley being the worst. Saban will not let anything that he thinks is negative be printed, and he will use the sponsers and advertisers on radio and print media to acheive this. All the while the same media outlets will do all possible to report anything slightly negative about rival schools, mostly LSU, UT, and AU. I guess it is part of the process, I am just glad we (UGA) dont have a classless coach like Saban. You Bama fans can have that jerk. Cant wait to beat the H-ll out of him between the hedges this year.

"The last part of that is not true."

gadawg is right - this is standard operating procedure for Saban and the university of Alabama and it's worse in Mobile than anywhere else. The grade changing incident there with the two kids that would end up signing with Auburn is exemplary of what is taking place now statewide. One of the kids already had a qualifying gpa but somebody went in and changed their grades - and when they committed to AU it got "leaked". Bet the farm that had they signed with ua that would never have been noticed much less brought public. Somebody thought their "insurance policy" for ua could be turned into a liability for AU. Saban isn't in Louisiana though, and he will soon find out that he doesn't have the control in Alabama that he did there. Buen suerte, commandante......

Guys! I found this mole hill over here. If we try really, really hard I think we can make a mountain out of this thing.

Who's with me? Heave..Ho..Heave..Ho. Come on get your backs into it.

In the words of Allen Iverson, we're talkin' about practice. It's only practice.

Will Collier comes out of hibernation to post something negative about Saban and Alabama?! SAY IT ISN'T SO!!!