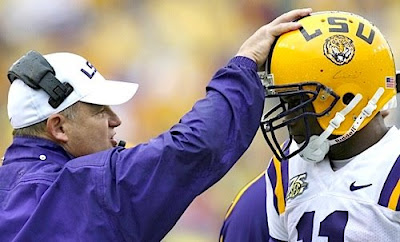 His being questioned by federal officials after allegedly using a small amount of counterfeit money? That never happened now, did it? That little run-in with police for trying to use false identification to enter a gambling casino that resulted in a suspension from the team? We all make mistakes.

The disturbance last weekend at a Baton Rouge eating and drinking establishment? It's all forgotten.

Yes, Ryan Perrilloux will once again be a proud member of the Louisiana State Tigers come Sunday. He will join the team on its visit Monday to Washington, D.C., and the White House, where the Tigers will be honored for winning the national championship.

"Yes, Ryan will be going with us," coach Les Miles said.

Yes, this is what can happen when your current quarterbacks are a walk-on transfer from Harvard (Andrew Hatch) and a redshirt freshman (Jarrett Lee).

After all, there's a national title to defend!
Posted by dawizofodds at 4:06 AM

Just another day in the $EC

not everyone at LSU agrees with this

How embarrassing. Even for a USN&WR Tier 3 school.

How embarrassing. Weak academic smack on a football blog...

"Not everyone at LSU agrees with this"??

Yeah. And those 2 - a sophmore and a freshman - were dismissed from school today for conduct unbecoming of an LSU Tiger. Oh,the irony.

The only messsage Miles is sending to Perrilloux is that he can do whatever he wants consequence free. These 5 day suspensions barely qualify as a slap on the wrist. You want to win, but if it means keeping a scumbag like Perrilloux on the team, I'd rather lose.