The Glass Is Half Full at Minnesota 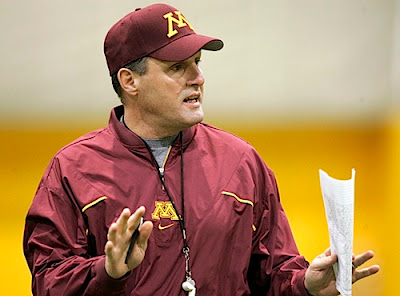 That surge of energy you feel as spring practices get rolling across the country? Well, it's not coming from Minneapolis, where interest in the Minnesota football program has hit an all-time low.

When they talk about raising the bar in Minnesota, that means lifting the bar off the ground. The Gophers were a not-so-golden 1-11 in 2007, with overtime needed to get the 1.

"I want to make everyone aware of what our goals are. That's a Big Ten championship and going to the Rose Bowl," coach Tim Brewster said, offering no timetable as to when the Gophers might next visit Pasadena.

Writes Tom Powers of the St. Paul Pioneer Press: "Had Brother Brewster been speaking at the Rotary Club or VFW, his remarks would have been punctuated by several 'amens!' But the press is a tougher sell, although several among us were beginning to get that glassy-eyed look. Instead, we were more interested in the status of that defense, which leaked like the roof of a Guatemalan shack last season."

Brewster said recruiting had picked up and promised the defense would be better in 2008.

Powers, again: "[Brewster] and his assistant coaches are coming off a recruiting period that saw them log a quarter of a million travel miles over six weeks. Basically, they were searching for someone who could tackle. And by many objective accounts, they did pretty well. Of 45 official visits to Minnesota, 31 of those recruits signed on to become Golden Gophers. Twenty of those are defensive players.

"Furthermore, to the best of my knowledge there was no adult entertainment involved during any of those visits. That's a definite step up. It also means there's a lot more room for the Minnesota Vikings to spread out and get comfortable in the local strip clubs."

One of Brewster's recruits, Keven Whaley, is recovering after being shot in a leg last Friday outside a Virginia Beach nightclub around 2 a.m.

"People say what [Whaley's] doing out at that time of night? He's on spring break," Brewster said. "I don't know the details. All I know is Kevin Whaley is a great kid. . . . Whether or not Kevin did anything wrong. I can't say that at all. I wouldn't say that at all."
Posted by dawizofodds at 3:55 AM