Bowden Continues to Be a Real Pick 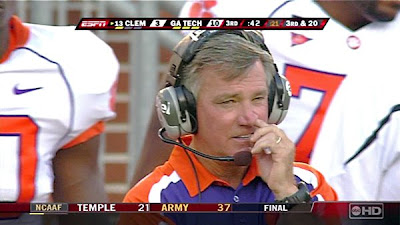 Clemson's Tommy Bowden was given another opportunity Monday to explain the decision to yank the scholarship of reserve tailback Ray Ray McElrathbey and instead of running with the ball, he decided to pass.

Bowden was asked two questions: Was McElrathbey habitually late to team functions, and did McElrathbey have the option to return to the team on scholarship in the fall?

"I've never commented on private things," Bowden said. "I made a comment Saturday. If you want anything else, get it off that comment or get it from Tim [Bourret, sports information director].

"It's your job to ask the question, it's mine to say no."

Posted by dawizofodds at 4:07 AM

Bowden continues to amaze me.

Here's the scoop on the situation.

Ray Ray tore his ACL last fall and has been going through rehab ever since. He has not given the team or his rehab a legitimate effort since the tear. This lack of effort comes from several factors, one being the fact that he is burdened by taking care of a 12 year old every day. Another factor is a lack of motivation that many people suffer from when they are hurt. Also, factor in that he was not going to see the field at running back anytime in the future. Now you see some of the unspoken issues behind Bowden's decision.

Do you honestly expect CTB to throw Ray Ray under the bus when people ask why he is opting not to renew his scholarship? Bowden is not going to call him out, and put Ray Ray down on a national stage. Instead, Bowden has elected to let himself take the heat for this situation. Has anyone noticed that Ray Ray himself has not said anything about his situation? It's our biased, loudmouth running back that's doing the talking.

We are in a numbers crunch for next fall, and Bowden had some tough choices to make. He saw an opportunity to free up a scholarship and take care of Ray Ray at the same time, so he made the tough choice. Another thing that is wrong, he was given the option to come along as a graduate assistant first, not after the media got onto him. CTB was trying to take care of him and give him a free education, while alleviating a numbers crunch.

All things considered, I would not have chosen a high profile person like Ray Ray. He is also very athletic and can be used at a number of positions. Running back is stacked, so move him back to defense. But, Bowden made the decision for a reason. He's not the "pick" you're making him out to be. He's in a tight spot with tough decisions to make, but he is absolutely still trying to take care of his players.

Thank you Paul! Anyone who knows Coach Bowden knows him to be a man of faith. A little arrogant at times, but a good man none the less. This had to be a tough decision and I hate it for Ray Ray, but he was never going to see the field on either side of the ball.
He's not ripping his scholarship before he graduates. Ray Ray will graduate. CTB kept his promise in that regards. Ask anyone in the Clemson area, the coaches and their wives have gone far above and beyond to take care of Ray Ray and Fahmar.