Looking for Blame in Endless Games 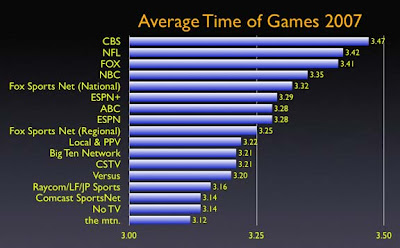 The Football Rules Committee was right. An average game lasts too long, especially when it comes to games telecast by CBS.

What is disturbing is that the average length of a game increased 1:47 from 2005. Hence the conundrum facing the Football Rules Committee: How to keep the integrity of the game in place while not damaging revenue streams (often referred to as commercials).

A study conducted by Marty of cfbstats, the ultimate site for college football stats junkies, and Matt from the excellent College Sports Schedules, has given us another network-by-network breakdown. We're once again happy to serve as the press agent for this project — as we did last year — and you can view the full details of this year's study at cfbstats.com. 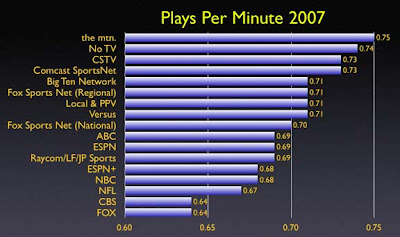 Extracting commercialization from a telecast is difficult. Perhaps the best method is to examine the impact on a game. The chart above shows the average number of plays per minute in a 2007 telecast. As you can see, the fewest number of plays per minute belonged to the networks whose games also lasted the longest, suggesting increased commercial time. 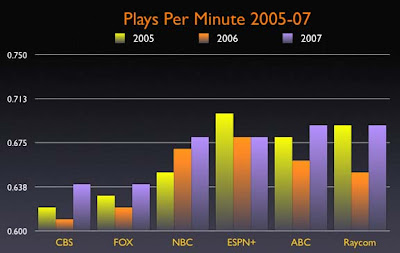 Above and below we have charted the plays per minute of networks who have been broadcasting games each of the past three years. (TBS, NFL, Big Ten Network, Versus and the mtn. did not meet the three-year criteria.)

You can see the impact of the 3-2-5e rule in 2006 across the board and how the number of plays rebounded in 2007 to meet or exceed the 2005 averages. It's also interesting to note that CBS and Fox have had a stranglehold on fewest plays since 2005, again suggesting that games broadcast by these networks have higher than average commercial breaks. 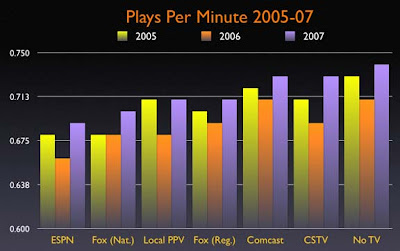 Our thoughts: While commercialization is arguably the leading contributor to games dragging on to no end, other factors — increased passing, overtime and instant replay — are also to blame:

Passing: Blame this on the popularity of spread offenses. Increased passing results in an increase in clock stoppages. Simple as that.

Overtime: While this has been a huge success, the rules committee blew it by not taking a look at overtime rules in an attempt to speed play. We will address this in detail on Thursday. Stay tuned.

Instant replay: A necessary evil, but one that can be streamlined. That's why the Wiz was mystified that the rules committee — while trying to shorten games — would agree to give coaches an extra replay challenge if the first one is upheld. Instituting this rule guarantees longer games.
Posted by dawizofodds at 3:18 AM

Glad to see that CFBstats and you are all over this. We all know (anectdotally) that CBS can take an SEC slugfest and stretch it out for four hours, glad to see the data support those observations. They just need to quit screwing with our game, and cut a few commercials. I mean Verne is great and everything, but is he worth a four hour telecast with TO's after a score and before the first snap?

I've been putting SEC football games on DVD for my own personal consumption for a few years now, editing out the commercials, and I can confirm these results.

ESPN/ABC games from start to finish have about 37 minutes of commercials. CBS games have about 54 minutes. ESPN/ABC will usually take three, no more than four commercial breaks per quarter.
I've seen CBS go to commercial five times with less than two minutes left in the half. It's absolutely ridiculous.

And all those LSU overtime games this year were on CBS and five hours long.

I'm just fortunate that none of the games I attended this past year were on CBS. Because as long as they are on TV, they're even longer in person.

your last entence about sitting at the game being even longer is the truest statement I have seen made on this site in 7 months!

I was shocked to see NBC wasn't at the top of the longest games chart. Having been to a number of Notre Dame games over the past few years, it seems as though they take five hours to complete. I timed a game there two years ago, without overtime, that took over four hours to play.

I guess the SEC fans have it worse off than the Irish fans. I'm just lucky ABC covers Michigan, if NBC or CBS was in charge I'd jump out the window.

I can't even remember the amount of OT and close ones at the end. They don't need to cut to TV timeout every time the clock stops though.

Mrs. Bryant would always get pissed because after a day of CFB I would flip to CBS to see the end of an SEC game and it usually involved staying there for an additional 45 minutes to watch what is probably only 4 minutes on the field w/ CBS commercials and overtimes.

Led to many lonely nights on the couch. ;)

I've been wondering about this for a few years, but isn't there a way for the networks to have advertisers purchase a segment of the broadcast and put their logo in the corner? This would/could be similar in fashion to the World Cup so they can eliminate some of the TV timeouts.

What the networks need to do is charge more for each commercial and bring down the number of commercials played. It suggests that the CBS sales staff isn't managing their inventory as well as the other networks, and that leads to these discussions about our beloved game.