Nevada Fans in a Lather Over Suds 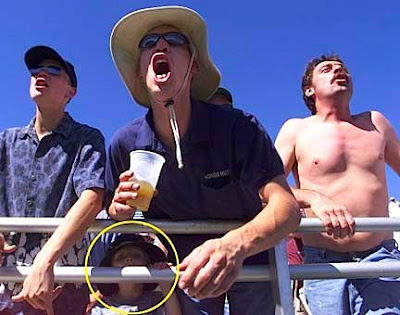 You may have missed last call at Nevada's Mackay Stadium.

Although selling beer at Wolf Pack games brings in over $75,000 a year for the athletic department, officials are considering banning sales in part because games have been marred by alcohol-fueled fights in the stands.

Student Greg Green says shutting off the taps is a big mistake and he has started a Facebook group to fight back. Green says banning sales "could create pregame drinking and a more dangerous situation with people drinking and driving to the games."

Mackay is one of only a handful of stadiums where you can buy beer. At rival Nevada Las Vegas, the suds will continue to flow freely during games at Sam Boyd Stadium.

"If they banned beer sales at Sam Boyd Stadium, they'd have a name for UNLV vs. Colorado State, too: 'World's Least Attended Outdoor Football Game.' " Posted by dawizofodds at 3:23 AM

I'm going to go on record and say that will be a bad move. You're in the desert and playing mid-major football. Beer is one of the few high points.

the other 115 programs have no problem getting hammered before the game...i don't...im not sure why nevada has to serve beer at the game for people to get drunk.

the fight thing is true, its called the nfl and its a fucking trafistshamockery how stuipd nfl games have become.

also, nothing speaks to the retarded state of our society like this line: "Student Greg Green says shutting off the taps is a big mistake and he has started a Facebook group to fight back."

The kids at that school are being deprived of the time honored tradition of taping a flask to the inside of your dates thigh by having beer for sale at that stadium.

Greg Green may think he'll miss his warm flat beer, but once he's had a shot of Bourbon warmed by a Co-eds thigh, he'll realize what a good thing that is.