Did Somebody Impersonate Cal's Tedford? 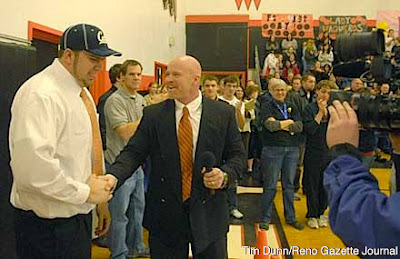 When offensive lineman Kevin Hart of Fernley, Nev., announced his commitment to California last Friday, he did so in front of a packed school gymnasium. Two local TV stations showed up to film the event as he prepared to become the first Fernley athlete to receive a full scholarship to a Division I school directly out of high school.

"They really sold me," Hart said. "Coach [Jeff] Tedford and I talked a lot, and the fact that the head coach did most of the recruiting of me kind of gave me the real personal experience.”

But it appears that Hart, pictured above with Fernley coach Mark Hodges at Friday's ceremony, was the victim of a prank. Somebody, it appears, has been impersonating Tedford. There never was a scholarship offer — let alone any official contact — from the Golden Bears.

Hodges, who has been a coach for more than 20 years, now says the matter is a "law enforcement investigation."

Oregon was another so-called finalist for Hart, and somebody appears to have been impersonating an Oregon representative as well. An official from Oregon confirmed Hart was not being recruited. The validity of Hart's other finalists — Nevada, Illinois and Oklahoma State — remain in question.

Thanks to Jordan!
Posted by dawizofodds at 4:11 AM

Where was the kid's high school coach in all of this? I think he is most to blame.

He should have found it odd that the Cal staff never contacted him and that Jeff Tedford was directly recruiting his athlete instead of a position coach.

You'd would like to think that the coach wouldn't let a kid get hyped up like this if he wasn't at least decent enough to get some Div. II offers or something.

Curious to see how this turns out.

Don't colleges go through the high school coach before even contacting the player directly?

You would assume so, but if I'm a high school football coach and some guy calls saying he's Jeff Teford... I don't know what Jeff Tedford sounds like. Heck I foll CFB religously and I'd probably have to google him to remember what he looks like. Some guys shows up in a ton of Cal gear, I'd assume he's somewhat legit.

This could turn out to be one of the best pranks in recent years. From an objective-I don't-about-a-kid's-feelings sort of way. In real life... that's pretty crappy.

so he never met with him face to face and didnt take a visit to the school? wasnt getting calls from rivals.com and the like? there isnt a HS athlete in the nation who isnt checking out their rivals or scout.com profile
i think the kid staged this for attention

Forget a prank, this kid lied to try and get a girl and it blew up in his face. Once he was getting the attention and being interviewed he couldn't stop. He is from a small town in Nevada, he probably never thought anyone else would find out.

I called this guy and did it, so I am really getting a kick out of these replies.

Hey Cal's Coach: What did this kid ever do to you? Or does he just kinda suck all around?

Do football coaches in middle of no where nevada know anything about the recruiting process? Some lessons are learned the hard way.

College Coaches do not necessarily go through the High School Coach. My nephew is being recruited for Soccer, and several College Coaches, both Div. 1 and Div. II, have contacted him, or his father, (my brother), directly. The difference is, they have ALL wanted him to "officially visit" their schools.
So, student/athletes and parents....be aware, and wary.

Think about it, though. This is Fernley, Nevada. For those of you who aren't familiar, it's a very small town.

Not a single Fernley football player has EVER been recruited to a division 1 team. Ever. I'd say that this is everyone involved's first rodeo. I wouldn't be one bit surprised if all people involved got caught up in the dream of it all, without checking any credentials.

Also: Just doing some searching online last night I looked up Kevin Hart's name on Myspace.com. The only hit for a Kevin Hart in Fernley, NV appears to be some sort of hoax myspace page, made to poke fun at him. Here's the link: http://profile.myspace.com/index.cfm?fuseaction=user.viewprofile&friendid=148803006

I'd say this kid has some enemies for some reason.

this is really funny

His coach was in the middle of it. It seems fishy. read this article. It was written before he made his college choice.

I'm from the area and have seen the paper write ups and I think the coach's involvement is very suspect mainly that he was either clueless as to how the recruitment process goes or he played along neither scenario is a good one. The coaches recruiting and practice violations forced the varsity team to forfeit all their wins in his first season at the school. Things just seem to get better and better under coach Hodges. This is only year three for him...Go FHS!

How does a parent let their kid commit to a school that they have never visited the campus. If he is being offered a full ride they definitely will host him on an official visit. This screams of the kid doing this to himself. I could be wrong but to be this naive of the recruiting process is just plain wrong.

Is this kid related to Dave Hart, who coached at FHS in the 80's? Was there no letter or e-mail from any of these schools that his parens would have seen?

Ok, so a small town coach doesn't know how the process works. Ya think his mom and dad might have wanted more info, though.

I wonder why he decided to narrow it down to Oregon and Cal. Was it because those hats were on sale at his local Lids?

My theory on all of this now is that the coach may have suspected him of lying and told him that they would do a press conference, thinking the kid would come clean and tell the truth. When he didn't, the coach second guessed his own instincts and thought that *maybe* he was telling the truth.

I think with this kind of a whopper of a lie at his young age, it's likely he's been a full-time liar for a very long time.