To the Victors Go the Spoils 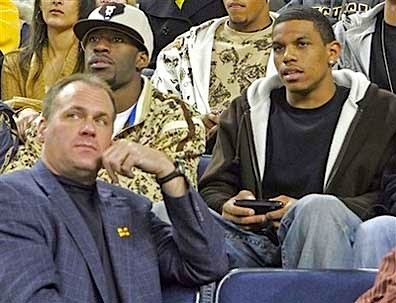 Rich Rodriguez was showing Superman recruit Terrelle Pryor around Ann Arbor on Saturday. Part of the day was spent at the Iowa-Michigan basketball game, which became a sideshow when Rodriguez and Pryor walked into Crisler Arena with about 12 minutes left in the first half.

Asked about his visit, Pryor told the Associated Press via text message: "It's cool."

Details about Rodriguez's contract also became public. He has a six-year deal worth $2.5 million

annually and — get this — a $4 million buyout. Gee, where have we heard that number before?

The messy divorce between Rodriguez and West Virginia continued. West Virginia governor Joe Manchin joined the fun, saying Rodriguez was wrong to suggest there is an ongoing smear campaign.

"As far as everyone I know — and that includes the president and the athletic director and most of the staff — there is no smear campaign," Manchin told the Charleston Gazette. "The facts are simply what they are."

Michigan fans have been giddy over all of this, but Mitch Albom of the Detroit Free Press has a warning for the Wolverines:

"If Lloyd Carr, early in his career as Michigan head coach, had bolted for another school and a richer contract — as Rich Rodriguez did — if he initially lied about a meeting with that school, if he abruptly left the Wolverines before a bowl, if he informed Michigan of his departure through a graduate assistant, if he informed a prep quarterback prospect before he told his U-M boss, if he shredded files in Ann Arbor, if he took most of the U-M staff with him, and if he owed Michigan a $4-million buyout and had his lawyers working on ways not to pay it — you can bet we'd be angry."

Update: More fuel for the fire. Former West Virginia offensive coordinator Calvin Magee said he wanted to stay at the school, but a WVU administrator told Magee that he would not be a candidate to replace Rodriguez and pointed to Magee's black skin as explanation. This, according to Mike Brown, Magee's agent. Magee eventually resigned and has joined Rodriguez as Michigan as associate head coach and offensive coordinator.

Also, Stewart Mandel of SI.com has an excellent piece on the situation.
Posted by dawizofodds at 5:02 AM

The goofy ear fella expresses what WV people have been saying all along.

And now RR's agent/lawyer is putting out a charge of racism, saying Calvin Magee wasn't considered for the HC job at WVU because he's black. Problem is, Calvin Magee took that flight with RR to Ann Arbor, and posed by his side at the 12/17 press conference announcing the new UM coach.

The only people engaging in a smear campaign are in RR's corner.

Wow, that's really interesting about Magee. As aceer said, there are photos of him leaving with RR and they are also side by side at the press conference. Magee showed who his allegiance was with from the beginning, and if he had ANY interest in being head coach, he should never left for Michigan or participated in the press conference.

Brown (the agent/lawyer) also didn't say who in the WVU administration was being "racist," which makes that kind of inflammatory accusation harder to defend. No single person in WVU can come out and deny it, when no one was named. It's sad, really.

RR and his shady tactics are now UM's baggage.

This is utterly amazing. Magee appears at the press conference announcing RR as UM's next head coach, RR says he'll be on the UM staff, and then a couple days later Magee goes back to WVU to see about a coaching position.

Get the timeline straight, get the facts straight. The only ones acting juvenile here are associated with RR. Mandel's article is clearly not "excellent." It is nothing more than fact-free name-calling.

To quote someone who said it better than me:

This is a case of determining who's at fault. It's not a case of proving which school is better than the other.