Text Appeal Is Shot Down 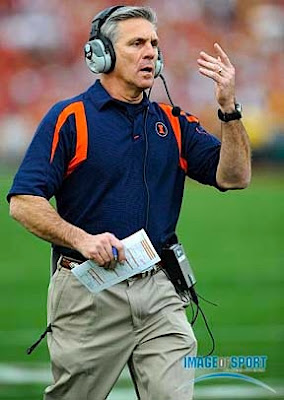 Illinois' Ron Zook, king of the text message, is going to have to find a new way to do business. The NCAA on Saturday upheld a ban on text messaging to high school students during a meeting in Nashville.

The vote to keep the ban in place wasn't close. Of the 306 representatives voting, 79% voted in favor of keeping the ban.

Coaches had argued that the ban, which went into effect in August, was vital to connecting with teenage prospects. Supporters of the ban said that some coaches were inundating recruits with text messages, driving up cellphone bills.

As posted here last April, cost had nothing to do with this. Gary Parrish of CBS Sports made a few calls and found that most cell phone providers offer unlimited text messaging for an extra $20 a month, or 67 cents a day. The ban had more to do with the NCAA's inability to keep pace with technology.

Nonetheless, we were left with some terrific text-messaging moments, including a member of Crewcut Charlie Weis' staff badgering Arrelious Benn, who ended up at Illinois, and Jeb Bush taking time out from his busy duties as governor of Florida to text Myron Rolle on behalf of Florida State.

Thanks to Image of Sport.
Posted by dawizofodds at 3:54 AM

It's not so much the cost as to why I support the ban. It is because receiving 100 text messages a day interferes with a high school kid's ability to focus on class and classwork.

like most of these guys give a rats ass about school work purdue matt. cmon man. an end to a mean my man.

Notre Dame is sooo desperate it is funny. The Ogre Weis bullies people around including recruits, that's why so many have left the program....and few even had to "escape". I suppose that is how this vulgar man got his wife but bullying her.....she probably still is trying to escape but the money is keeping her around. Weis must go.

BTW, $20 a month for unlimited text? Just another bill on top of everything else raising kids, it all adds up. And when you don't or can't spend that $20 a month, it ends up costing the kid's parents $150 when it gets overrun, who pays that?

Try raising some kids before you get into the value judgement area.

Notre Lame is your grandpa's team at best. They are a "has been" program that is totally disfunctional they are desperate. No wonder sooo many jumped ship to transfer to another school. Serious problems under Weis.