A Sharp Downturn in Bowl Viewership

The stated goal of the Bowl Championship Series is "to match the two top-rated teams in a national championship game and to create exciting and competitive matchups between eight other highly regarded teams in four other games."

But the BCS fell far short of that goal this past postseason, with a sharp decline in viewership of four of its five games, according to Nielsen Media Research. The BCS was not alone as viewership of all bowl games took a significant pounding.

BCS games held down five of the top six spots of most-watched postseason games, but only the Orange Bowl saw a slight increase (6%) in viewership. The declines were dramatic, with the Sugar Bowl experiencing a drop of 25%, followed by the Rose (20%), BCS title (17%) and Fiesta (8%).

Viewership of all bowls declined by 12% with a 3.6 average rating, the lowest in the 10-year history of the BCS, according to Jon Solomon of the Birmingham News.

We've charted all the data for careful examination. To get a closer look, click a chart to enlarge it. 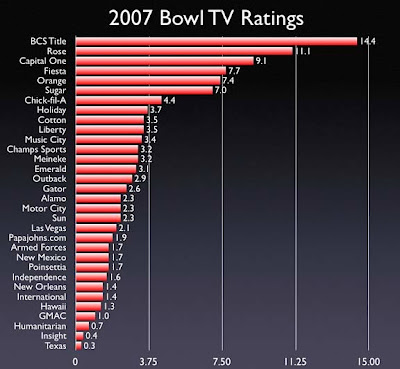 This chart shows the 2007 ratings for each of the 32 games. The Insight and Texas bowls — games with the lowest viewership — were broadcast by the NFL Network, which has a limited subscriber base. 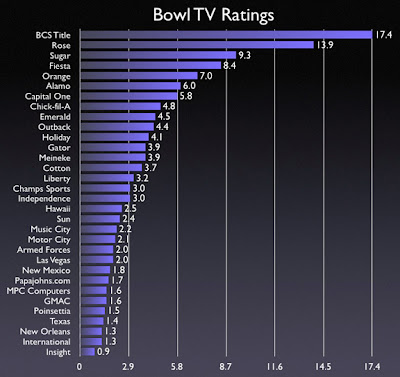 Here's a look at the 2006 ratings, when the BCS lineup held down the top five spots. The Alamo Bowl between Texas and Iowa clocked a 6.0 to become the most-watched bowl game ever on ESPN. 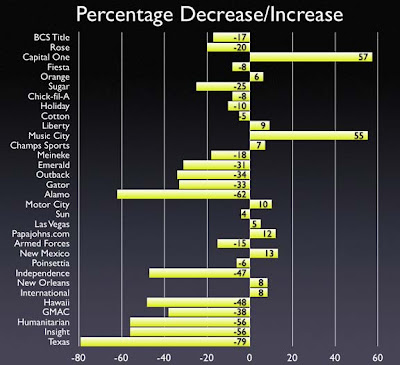 Here's a look at the difference in percentage from 2006 to 2007. As you can see, 21 of the 32 games had lower ratings in 2007, with many of the ratings being significantly lower. The biggest loser was the Texas Bowl between Texas Christian and Houston. The biggest winner was the Capital One between Michigan and Florida. 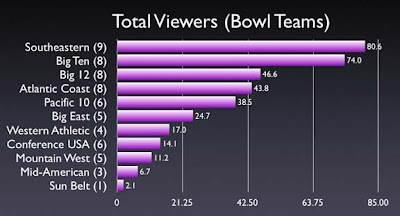 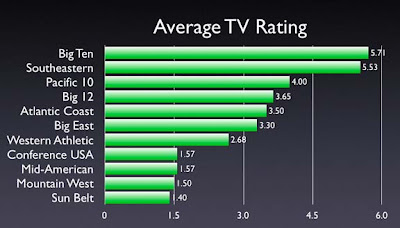 As reference, here are the bowl game matchups and broadcasting partner.

Don't discount the Fox factor for the BCS games. Their announcing is horrible. But you are right, the match ups are killing viewership.


FOX, FOX, FOX, see the pattern? They need to bring their "A" team to these games, not a bunch of clueless nobodies.

It's all about matchups. The BCS games were garbage this year. The Rose Bowl basically screwed everything up by taking Illinois over Georgia.
And I do agree that FOX's production of these Bowl games are terrible.

its worth pointing out that the Alamo, which had the second largest drop, was up the same night, same time, against the final regular season game for the Patriots...Pats-Giants acutally.

i don't feel like looking this up, but i thought the sugar refused to give up GA anyway.

Fox might be a pattern, but to fix that Fox should get some type of regular season package.

yes, the sugar bowl wasn't going to give up georgia, but there were plenty of other schools out there that would have created a better match-up, Missouri for example.
the rose bowl chose to stick with tradition and in the process killed their own ratings (and usc's chance for an AP championship...)

Ever consider that it has nothing to do with the match-ups or what channel the games are on?

People are fed up with the BCS. The games don't matter and there's no true champion. We're not watching because we don't care.

Rutgers gets the 1.4 at Texas and the International not terrible showings for two awful bowl games.

When the morons at the Rose Bowl finally realize that their obsession with the Pac-10 v. Big-10makes no sense as evidenced by the rediculous matchup of USC and Illinois, then we can start to have some better games.

USC v. Georgia or Missouri would have been intense.

Plus, is there anyway to get rid of some of these stupid bowls that matchup 6-6 teams such as the Meiniki Bowl or the Chick fils-a Bowl. How retarded.

I'm not sure about anyone else, but my interests in bowl games don't have to align with the interests of broadcast companies.

We get the same crap every year in sports with playoffs. Rockies vs. Red Sox anyone?

TV ratings tell how many people tune into a game and they aren't an indicator of the quality of said game. They're an indicator of how popular the teams are that are playing in the game.

If giant tv ratings are what everyone wants, just put Notre Dame into the BCS Title game every year.

But what would that have to do w/ college football?

ok, we need to get this stright:

the rose bowl is not the issue here. LSU was taken by the MNC Game, therefore the Sugar gets UGA...the rose bowl never had a chance. these guys are a team, but they are looking out for themselves first. They were not going to give up UGA, a team that could have been in the MNC, for a Hawaii v. Illinoi game...sugar bowl rating would have been twice as bad.

And Missu, they could not be in the bcs bacause kansas and ou where already in...can't have three teams. I hate the bcs as much as the next guy, but the two team per conf rule is actually a good one.

So, again, the matchups sucked real bad, but lets start blameing those who are responsible instead of repeating "well zook shouldn't have been there" over and over again....this wasn't an issue of one bowl picking one team and ruining 45 bowl games...thats not what happened.

//TV ratings tell how many people tune into a game and they aren't an indicator of the quality of said game. They're an indicator of how popular the teams are that are playing in the game.//

Well said. Everyone bitches about ND, but then turns around and says the XXXX Bowl sucks because, I mean, look at the ratings.

Tornadoes, why are you slamming the Chick-Fil-A Bowl? That's a TOP matchup between the ACC and SEC, and it was the 2nd highest rated non-BCS game! I definitely agree that we need to get rid of the games between 6-6 games, but get your facts right on which are the "good" bowls and which are the bad ones.

To add to the last comment, the Peach/CFA Bowl has had the smallest average margin of victory of all bowl games since 1992.

They also have the largest non-BCS payouts.

//They also have the largest non-BCS payouts.//

This isn't true, the Cap One is the highest non-BCS payout.