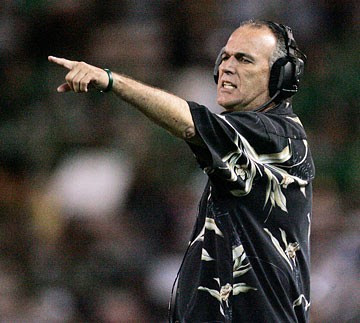 Hawaii is looking for a new coach after June Jones abruptly resigned Saturday night, according to the Honolulu Advertiser. It would appear that Jones is headed to Southern Methodist and will become the Mustangs' coach. SMU has offered Jones between $1.7 and $2 million annually. He made $800,016 at Hawaii.

Update: The Honolulu Star-Bulletin reports Hawaii is making a last-ditch effort to keep Jones. Stephen Tsai of the Honolulu Advertiser reports that a scheduled news conference in Dallas at 5 p.m. Central time has came and went, and now reporters have been told there will be a significant delay.
Posted by dawizofodds at 9:45 PM

A non-BCS school paying between $1.7 and $2 million for a football coach. I never thought this is what college football would come to where schools that don't have access to the big money revenue streams from TV, bowls and ticket sales throw this type of money around for a winner. Ford Stadium (SMU's on-campus stadium) only has a 30,000 seat capacity. I'd love to see the creative accounting that will be done to balance the books. Then again, they're just throwing alumni money around to make a splash.

greg you're right and wrong. you're right about the alumni trying to make a splash, but they are serious about making smu a winning program. however, there will be no creative accounting. smu and its alumni/boosters have more money hanging out of there asses than many much larger schools.

fwiw, their on campus stadium, though small, is pretty damn nice.

gerry_dorsey, my point regarding creative accounting is unless they are able go undefeated in C-USA (only Tulane in '98 has been able to achieve such a feat) and land a BCS slot (which the Green Wave were not able to do), they are not going to generate enough revenue to keep the program in the black. Yes, BCS schools utilize booster money to support their athletic programs but at least they generate significant revenue. SMU is still going to be a football program that operates in the red (a deficit).

Why throw around this kind of money which is so far beyond the going rate in the conference when you can't win a national championship?

all valid points greg...but you have to start somewhere i guess. they do have a bunch of resources though, from financial, to recruiting, to being smack dab in the middle of a huge market.

I beleie SMU is trying to see the bigger picture and will look to relocate to a better conference when those doors open up again in the future.