Jones Not Gone — Yet 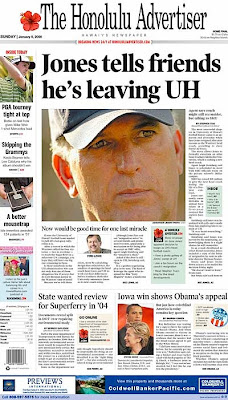 There hasn't been this much buzz about Southern Methodist football since the NCAA slapped the program with the death penalty in 1986. June Jones met Sunday with Mustang officials and is mulling an offer said to be in the $2 million range to become coach. Hawaii has counter-offered and Jones is said to be torn between staying in Honolulu or packing for Dallas. A decision is expected Monday.

Jones leaked word to friends on Saturday that he was likely to leave. Perhaps this was a designed play, but given the way Hawaii has been jerking around Jones and his staff, it's understandable. Disgruntled boosters now want to give athletic director Herman Frazier the boot and for good reason. Frazier not only bungled the schedule for 2007, leaving the Warriors with 12 regular-season games when they could have played 13, his mishandling of negotiations with Jones could lead to the coach's departure.

Facilities have been a problem all along. In May, quarterback Colt Brennan complained that there was no soap in the football locker room's showers. And that had been the case since September 2006.

Money is another issue. Jones' recruiting budget was only $50,000. Defensive coordinator Greg McMackin is Hawaii's highest-paid assistant at $110,000. He gave $20,000 of his salary to defensive line coach Jeff Reinebold when he accepted the job last April. Three Hawaii assistants make as low as $70,000 annually. And Hawaii ain't cheap.

Former Hawaii athletic director Hugh Yoshida, the man who hired Jones, said losing him would put "the athletic department behind the eight-ball."

Update: Jones has accepted the SMU job.
Posted by dawizofodds at 12:49 AM