It's Bedlam in Oklahoma 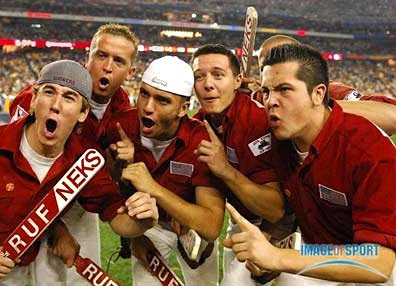 The majority of Oklahoma fans wanting a ticket to the Sooners' game at rival Oklahoma State this fall are going to have to pay and pay dearly.

Oklahoma State officials announced they won't be sell individual tickets to the Nov. 29 Bedlam game outside of the normal 5,000 tickets allotted to the Sooner fans. To get in, fans will have to buy a season ticket to see the Cowboys, a cost of $294 for a seat in the west end zone. A seat along the sidelines increases to $419.

This was a plan hatched last year by Iowa State for its game against rival Iowa. It helped boost Cyclone season-ticket sales nearly 20%.

"When you saw what happened there, you think, 'Maybe that's something we should consider,' " Oklahoma State athletic director Mike Holder said.

As expected, the announcement has created a state of Bedlam.

Thanks to Image of Sport.
Posted by dawizofodds at 2:53 AM

Because following Iowa States athletics is a good idea how?

georgia tech has been doing this to georgia for years. I don't see how this is news.

Georgia Tech has actually not done this the past few years, it's been grouped with one or two lesser (read D-1AA) games. But it's not a bad idea.

So if they sell the other 10 tickets for 30 bucks apiece they end with a profit?