Is Tiller on His Way Out? 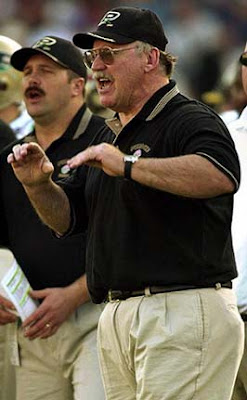 Rumblings out of West Lafayette indicate that Purdue 's Joe Tiller could be on his way out after the 2008 season.

According to the Journal & Courier's Tom Kubat, Boilermaker athletic director Morgan Burke is believed to have hired a coaching consultant to aid in identifying Tiller's successor, with the idea of having him serve on the Purdue staff for one season before taking over the head coaching position.

Kubat reports that members of Purdue's current staff were not planning to attend the American Football Coaches Association convention that began Sunday in Anaheim, but now most if not all have changed their mind and will be in California networking for new jobs.

Thanks to Kevin of We Are Penn State.
Posted by dawizofodds at 2:14 PM