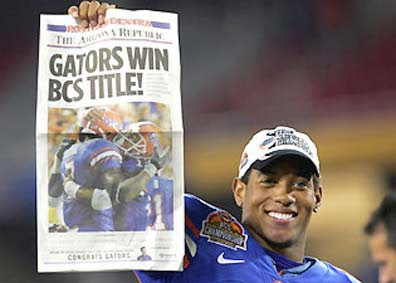 Going to a bowl game might not be such a great thing. A study by the Orange County Register revealed that six-figure bowl expense deficits for universities have become increasingly common the past four years. Consider these examples from the 2006 season:
So who is to blame? University officials say ticket allocations and hotel contracts dictated by the bowl committees are the driving forces behind the deficits.

But longtime observers of college sport said the lack of control by university administrations has allowed bowl games to become the ultimate college party and, it seems, everyone is invited.

"It's out of control. There's no cost containment," said Murray Sperber, the former chairman of the Drake Group, a national faculty committee pushing for college sports reform. "The trustees, the administration are along for the ride. The same administrators that are supposed to be watching over this are right there on the charter planes to the bowl."

The profitability of the bowls and not wanting to give up control probably mean no future playoff in Division I. Just consider that those who run the bowls are getting rich quick. And how Florida ran up its big deficit at last season's BCS title game.
Posted by dawizofodds at 1:58 AM

"University officials say ticket allocations and hotel contracts dictated by the bowl committees are the driving forces behind the deficits."

That's laughable. I love it when these schools - especially those from the oligopoly BCS - act like they're just a bunch of poor kids being bullied. If the schools have a problem with the allocations and hotels, then maybe they should, umm, not agree to them when they sign the contracts with the bowls.

A school might run a deficit based on their bowls alone, but the total bowl revenue from revenue sharing means BCS schools are guaranteed very nice profits. Its the non-BCS schools that struggle because they've been frozen out of the big-money bowls (their access to the BCS is token and just enough to prevent a lawsuit the BCS would surely lose; plus they don't play in any of the best second-tier bowls). The non-BCS schools need to either look at a playoff among themselves that would be a highly provocative move that would infuriate the BCS schools, or accept that bowls are a loss leader.

Some journalist or blogger needs to dedicate themselves to exposing the corruption in the current system. A lot of the evidence appears to be right there in the tax records for anyone to see.

I don't get why nobody is willing to take these people to task and start dropping names, petitioning to remove the non-profit status, etc.

Where is the Mitchell Report for college football?