Is Hiring Neuheisel a Desperation Play? 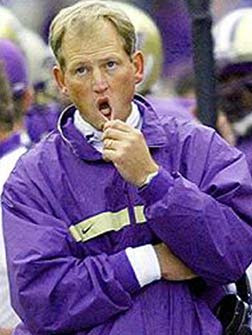 Maybe this Rick Neuheisel-to-UCLA thing is going to happen, but T.J. Simers of the L.A. Times says Bruin athletic director Dan Guerrero is in over his head again:

"The UCLA alumni are calling for Neuheisel's hire, and as I recall, a group of former players was also calling for [Karl] Dorrell's hire five years ago."

In other coaching-related news:

Southern Methodist: Former Texas A&M coach Dennis Franchione is talking with the Mustangs, according to the Dallas Morning News. Franchione has been out of work since resigning from A&M on Nov. 23.

West Virginia: Florida State offensive line coach Rick Trickett, who has spent two stints as an assistant with the Mountaineers, interviewed on Tuesday. Update: The Parkersburg News & Sentinel reports that Florida associate head coach John "Doc" Holliday is at the top of the West Virginia list. Thanks to Aldo at State of Miami.
Posted by dawizofodds at 3:39 AM

UCLA would help itself if they would pay realistic coin for a coach.

UCLA refuses to spring for a coach. Leach remains in Lubbock and UCLA is now prepared to get raked over the coals by the inventible NCAA investigation

Norm Chow would be a good hire, just look what he has done with QB's as an offensive coordinator. BYU which produces many good college QB's, North Carolina State with Phillip Rivers, USC with Carson Palmer and Matt Leinart, and then Vince Young at the Titans. This would be a good hire for UCLA

Coker would probably be a better fit for SMU. Both parties would be happy with 6-6 records every year and there would be no stress to win 11 games at SMU for Coker.