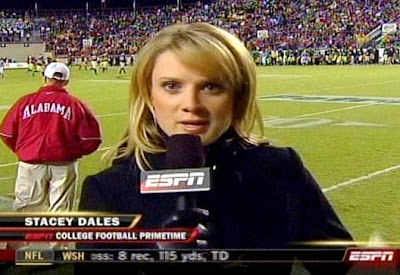 Stacey Dales is turning up more and more as a sideline reporter on ESPN telecasts, which begs the question: Is ESPN grooming her as a replacement for Erin Andrews?

Dales did the second of her three bowl assignments Sunday night. Meanwhile, long-time Wiz favorite Andrews did her only on-air appearance Saturday night at the Alamo Bowl. Andrews will be at the Rose Bowl, but she'll be working for ESPN Radio. Awful Announcing said it best: "What's the point?" 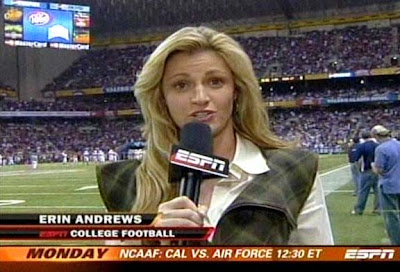 Rob Stone has the most sideline assignments with four. Stone, who in the opinion of this blogger does solid and entertaining work, made a name for himself earlier this season when he took on Bhut Jolokia, the world's hottest chili pepper.

But back to the question of the day: Why has Andrews' on-air role been diminished this postseason? Dales has — as they say — been sexed up and is turning up frequently on the four-letter network. Just wondering. ...

Thanks to TV Tan Line.
Posted by dawizofodds at 4:48 AM

She will however be hosting ABC's coverage of the Rose Bowl parade, so get up early, or more likelky set those dvr's to see Erin.

My guess is she just is getting some time off becauuse she will now be doing 3 basketball games a week for the next two and a half months.

none of them provide me with any mind blowing information, and although doable, none of them are "stop what i'm doing, b/c holy shit that girl's hot" hot. for all i care they could eliminate sideline reporters.

Parade? What's that have to do with the spread offense?

if you notice, Erin only does games Kirk Herbstreit is "doing."

I liked Stacey Dales better when she had the 'Schuman' attached to her name...she's still a WNBA player, right?
@boz:
Erin Andrews does those Thursday night games with Fowler/James/Flutie, and the Saturday games with Pasch/Ware.
Judging from one of the jabs Fowler said during the Alamo Bowl, she's a new Red Sox fan...

Stacey Dales, on the other hand, is very much young (though she's about a year and a hal younger than Andrews).

Erin Andrews is only tolerable with the mute button on...

As someone who has stood near Dales on a sideline, I can assure you that she DOES NOT need to be "sexed up."