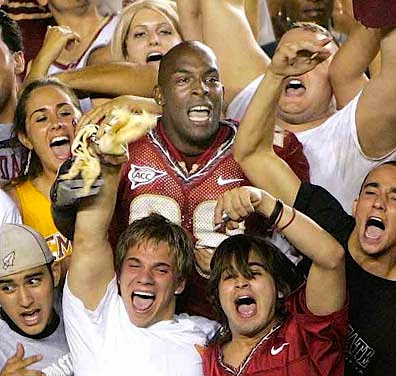 Think coaching salaries are out of line? Some bowl executives are laughing all the way to the bank, Brent Schrotenboer of the San Diego Union-Tribune reports.

“Frankly, my compensation package is none of your business,” Cavalli said.

Cavalli is not alone. From 2001-05, compensation packages for bowl game executives have increased about 70%, with many of them more than doubling, according to an examination of the bowls' Internal Revenue Service records. The Outback Bowl's Jim McVay earns about $490,000, more than double the salary for the CEO of the oldest bowl, the Rose Bowl ($239,807).

Eleven years ago, there were 18 bowl games. Today there are 32, some operated by ESPN. No wonder the opposition to a playoff by the bowl system.

Thanks to Mike.
Posted by dawizofodds at 4:43 AM

"No wonder the opposition to a playoff by the bowl system."

I was thinking the exact same thing as I kept reading.

I never understand that, though -- why the opposition? Nobody is suggesting we do away with the lower-tier bowl games. The playoff would be the top BCS teams and then all those mediocre 7-5 teams could still enjoy a payday and a bowl game and everybody stays happy. Don't get it.

what the hell do these guys do all year besides run around in hideous blazers??