The Ultimate Embarrassment for Alabama 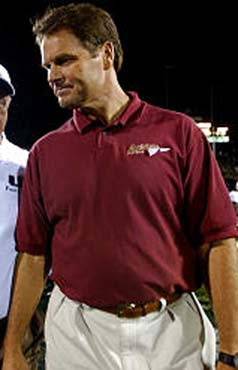 Much has been made of Nick Saban's contract, which at $4 million a year, makes him the highest-paid coach in Division I-A.

Turns out his Alabama team just lost to Louisiana Monroe's Charlie Weatherbie, right, who is the lowest-paid coach in I-A. Weatherbie's salary is $130,000 a year. That's mere pocket change to Saban.

How desperate did Saban get during Saturday's 21-14 loss? The site From The Bleachers also reports that Saban started standout receiver DJ Hall in the second half after it was earlier announced that Hall would be suspended for the game because of a violation of team policy.
Posted by dawizofodds at 4:01 AM

Didn't Alabama just give LSU, who most people have already anointed as the best team in the nation, all they can handle? More proof that the SEC is the toughest conference in America!

Didn't an average a best Colorado team give Kansas all it could handle AND beat Oklahoma? More proof that the Big 12 is the toughest conference in America!

Didn't a subpar Arizona team just give USC all it could hand AND beat Oregon? More proof that the Pac 10 is the toughest conference in America!

Shit... what were we talking about?

Didn't know former Okie State standout QB Charlie Weatherbie is coaching ULM! Good for him and their team. I'm sure he is as good of a coach as Saban!

Weatherbie's previous head coaching stops were at Utah State and the Naval Academy.

Nick Saban Lying and then going to Alabama = Traitor/Lyer/Are You Serious?

Nick Saban + Alabama = Not as predicted and a laughing matter

Nick Saban enjoy your last ride with football in Alabama. At least you're getting paid.... to lose all the time!

#2 Oregon had lost their best player and most important player against Arizona. With Dixon, 'Zona gets killed.

The SEC is a great conference, but this year it has looked bad at times in out of conference games and I think that LSU scraping by against these teams that can't handle the louisiana monroes's of the world doesn't look good.