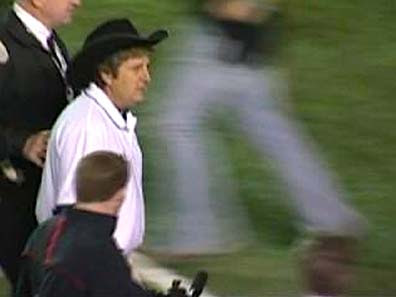 Yes, that's Mike Leach running off the field Saturday night wearing a cowboy hat after Texas Tech's victory over Oklahoma. Somebody put the hat on his head (video link) as he left the field. "It's really a nice hat so if anybody is looking for a hat, wants their hat back, it's going to be at the football office," he said.

As for Leach's $10,000 fine for criticizing officials after a Nov. 10 loss at Texas, five Texas Tech graduates have started a fundraising campaign to pay it off.

Thanks to Aaron!
Posted by dawizofodds at 2:56 AM