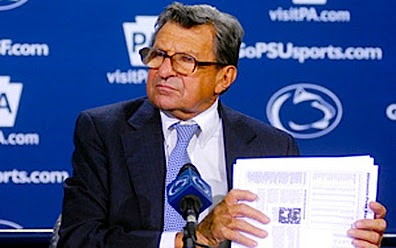 Coach Joe Paterno, were you involved in a road-rage incident on campus Friday afternoon?

One thing is clear: Joe Paterno was at the steering wheel Tuesday during his press conference and he wasn't going to address the matter further, cutting anyone off who dare question his authority. Penn State police continue to look into the alleged incident and won't release names of those involved because the investigation is ongoing.

There are other problems. Several of Paterno's players were allegedly involved in a fight Sunday at the Hetzel Union Building.

"I've been alerted that there might have been a couple football players involved in a fight; to what extent, to what degree, what happened, I'm not quite sure yet," Paterno said. "And until I find out what's going on, I think I'd be better off just not getting into that."

But back to Paterno. Check out this entry on a Centre Daily Times blog:

"Perhaps PSU's most recognizable face was possibly involved in a campus 'road rage incident' under investigation by PSU police. ... Nothing will come out of this, of course, but what exactly does 'not losing your poise' mean when preached to young men but not practiced in spirit by the preacher? And why doesn't an 80-year-old who has brought a billion or so to the university not merit a driver?"

The natives are getting restless. Since April, 12 Penn State players have been involved with the legal system, and others may be implicated in pending investigations.

Writes Walt Moody of the Centre Daily Times: "Penn State fans have long looked down their noses at what they consider as 'renegade' programs, like Miami and Florida State, but now they’re backing a team that has similar problems."
Posted by dawizofodds at 4:02 AM