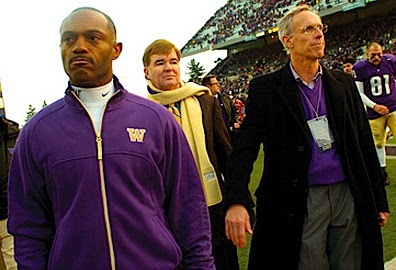 In a day of wild games, one of the wildest took place in Seattle, where Arizona stormed back from a 15-point deficit in the fourth quarter and defeated defenseless Washington, 48-41. If Seattle natives weren't restless before, they are really riled up now.

Imagine being in the Emerald City, waking up to your double latte with extra whip and seeing Steve Kelley's column in the Sunday Seattle Times titled: "Changes are needed at UW."

Writes Kelley: "Last week, Washington coach Tyrone Willingham speculated that none of his players could start for USC. And then those players went out and proved him right.

"Turns out the Huskies don't even have the talent to beat Arizona."

Kelley adds: "Willingham won't be fired, but at the end of this season, he should be forced to make changes in his staff."

Or how about this column from Dave Boling of the Tacoma News-Tribune titled: "Is Willingham a lame duck?"

Others want to clean house, which includes ousting athletic director Todd Turner, on the far right in the photo. The site Fire Todd Turner recently when online and has quickly gained momentum. One of the proprietors of the site recently wrote us about his reasoning behind taking his case online:

"Husky Stadium is decaying and one Turner's jobs was to spearhead fundraising for a new stadium. In his forecast he felt that it would cost $400 million dollars, he recently came out and said UW has only raised $150 million, just a bit short.

"All in all, most fans are furious with the progress Ty has made. After becoming media darlings the Dawgs have lost five straight [now six]. Has the schedule been brutal? Absolutely, but their second half showings have been terrible, a good team plays four quarters."

Washington was outscored, 22-6, in the fourth quarter by Arizona.
Posted by dawizofodds at 3:20 AM

Ty is a damn joke, the domers were right.

This is exactly why is is gone from ND. His teams fall apart in the second half of games and seasons. It was the same Stanford & ND and now it's the same at WU.