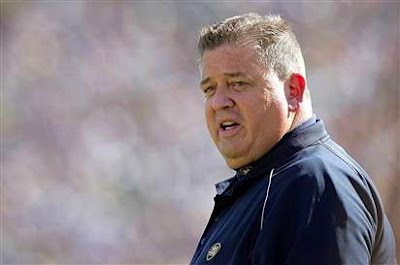 First the news: Former Notre Dame quarterback Demetrius Jones will not be released from his scholarship and will have to pay his way to Northern Illinois this year.

Now the comment: Although he announcement was made by athletic director Kevin White, everybody knows who was behind the decision, even if he says he wasn't.

Yes, we're talking about the big guy, Crewcut Charlie Weis, who likes to throw his weight around in an attempt to bully people. He had one last shot to show Jones who the boss is, and he used it.

The decision will cost Chicago native Jones $14,530, the amount for tuition and room and board at Northern Illinois. The cost to Weis, however, could be of the longer-term variety.

" 'The coaches [of the CPL] are a tight-knit group so if one of them feels slighted, it could have an effect down the road,' Rivals.com recruiting analyst Jeremy Crabtree said. 'Notre Dame could say that it is our policy and how we do it with all our kids. … It’ll be all right but maybe will turn one or two guys off or some coaches off against them, it might. But it is left to be determined what will happen.' "

Thanks to Kevin of We Are Penn State.
Posted by dawizofodds at 8:13 AM

You neglected to mention the immature manner in which Demetrius left. He practiced on Thursday, then did not show up for the team bus on Friday. Did not inform ANYBODY that he was leaving. People were worried, wondering where he was. Did not even have the courtesy to discuss it with his coach. Talk about a totally class-less act.
I would be willing to bet that if he hendle it maturely by sitting down with Weis and discussing his desire to leave, Weis would have released him from his scolarship. That is how it is normally done.

The above poster neglected to mention WHY DID DEMETRIUS JONES FEEL AS IF HE COULDN'T APPROACH IT WITH WEIS. Simple answer, Weis had lied and lied to the kid then bullied him. What choice did Jone have? Jones knew Weis would try to hurt him one way or the other...so he just left the situation. This speaks more to Weis poor coaching style and the abysmal team dynamics than anything on 19 y.o. Jones' part. Jones did the right thing even if he had hoped he could have done it better and with more forethought. ND and Weis did the WRONG thing and they are grown adults and had meetings on this with full forethought. Who is the bad guys? ND and Weis, not Jones. WAKE UP - THE ND FOOTBALL ECHOES ARE DEAD!

Maybe Weis is trying to set an example to scare Jimmy Clausen into staying.... If I were Clausen, I miss the bus the next bus too.......

Ahh, good ol' Jabba. He'll throw players under the bus even when they leave the team. I don't know why ND fans still defend this guy.

Notre Dame just doesn't get it --- the football program has done anything in 20 years and it is over. Wear the damn green jerzeys and look stupid and lose again. There is nothing special about ND.

Wait, a Bill Belichick disciple who likes to throw his weight around and show people who's boss? perish the thought!

Just a heads up: Jones would have had to pay his own way at NIU this year anyways, since they don't have a scholarship free to give him.

"He will not be able to receive an athletic scholarship from Northern Illinois this school year without the release -- though a spokeswoman for the football program said it doesn't have a scholarship to give Jones anyway. But a lack of release should not preclude Jones from practicing with the Huskies once he clears various hurdles with the school, according to the spokeswoman."

Oh, poor Demetrius, his life is so hard!

Bite me. The kid has no class, and the haters are just jumping on this to rip into Weis.

And yeah, the CPL are a tight-knit group. You really got to worry about keeping them placated. You know what might really help? Having a CPL guy on your staff. Oh, wait a minute, we already do! Ta-dah! Look at that: a little intelligence and a little less blind hate and all of a sudden, you haven't said something stupid! Way to go, Wiz!

Given the fact that NUI doesn't have a FOOTBALL scholarship to give DJ anyway, then ND must be doing this as a warning to other football players to not jump ship. ND and Weis are tools. They can go to heck.

Just another classless act by a big fat jerk with no class.
Guy sues the doctors that saved his life, even though it was his disregard of their advice that led to the problems.
But he is the "robot genius" so you will never hear criticism by the ND faithful. he can do no wrong.

It might preclude Demetrius from getting a scholarhip for another sport such as track. ND did this just to be a jerk to the guy. ND will get what it has coming on Saturday. Hope the Spartans clobber Clausen and send him packing too.

Seems to me, this is a very unholy move on the part of Weis. Jesus preached forgiveness, not hatred. Why is the fat man so bitter? You benched a kid after one start, and you expect him to be classy to you? Sure.

What Would Jesus Do and What Notre Dame Does are two different things. ND is corrupt. They just use football players - worse than other schools - especially if you African-American.

DAWIZOFODDS,
I usually expect you to be able to analyze something carefully, but it's pretty clear you can't get beyond any bias you have in this case.
Here's the facts: This decision isn't Weis' to make, no matter what he might want to see happen. The decision is part of a precedent that's already been set in similar cases involving transfers from the Notre Dame athletic department. That includes all sports, not just Football. In other words, the decision is "bigger than football."

And upon what basis did you develop the theory that Charlie Weis likes to bully people? Just curious. Actual facts beyond, "there are many stories out there..." would be appreciated.

weis is a douche. domer.mq i don't any examples to cite. i just call 'em like a see 'em, and that guy is an arrogant ass. may he lose to many a service academy.

why do so many people post as "anonymous" on here. it makes it really hard to bust people's balls.

The really sad part of all of the recent comings and goings of ND can be summed up by this: Even if ND somehow does get its football program back on track and within elite status, it has no honor left.

You once were Notre Dame--now you will have to do much more than win a bowl game, a BCS bowl, or a MNC to be more than a new Miami.

I never liked your team, but I used to respect it.

Notre Dame has truly become its own little delusional fiefdom. They actually think the rest of the world will think they are in control and have judged DJ and are punishing him because he deserves it. Oh please. Notre Dame made this statement to appear as if they are superior, above scandal, and in control ... when in fact they are NOT. The rest of the world knows that ND is a vindictive tool. NO FOOTBALL PLAYER SHOULD EVER EVER EVER WANT TO GO THERE AGAIN after what they did to DJ, Darius Walker, and numerous other stuff. Run, to not walk, away from Notre Dame as fast as you can.............because they will screw you over it that is in their best interest and image. I hope MSU just slaughters them on the field on Saturday ... can you say 54-0?

This is certainly a classy action on Notre Dame's part. I echo one of the anonymous folks - I've never liked Notre Dame football, but I never would have called the program anything but a class act.

ND won't release DJ from his scholarship...but I bet they are gonna wish they could get out of the contract with Weis!

Wow, There are always two sides to everything. The fact is unless someone has first hand knowledge, DJ left without disscussing it with anyone. That is on him. That leaves ND with very little options in the matter. Give one good reason why they should have released him. I do not care if he is 19, 15 or 45 he should have the maturity to speak up, are you kidding me, how many players on on the roster? Is the coach supposed to hold his hand? The descision was on him.

It doesn't surprise me that ND won't release Jones, ND is now made up of a bunch of vindictive little snots. What goes around, comes around. I hope ND never wins another game or get any good recruits. And if Willingham as white, he'd have gotten his 5 years.

If ND does eventually release DJ, it will be because it serves their own interests such as needing a scholarship or because they have negotiated something with DJ to keep silent. ND is evil.

I saw Clausen play in his last high school game. I've also saw Carson Palmer at the same age. There is no comparison. I am 100% sure that Clausen will fail. He's a huge douche with spiked hair. He has zero chance to succeed.