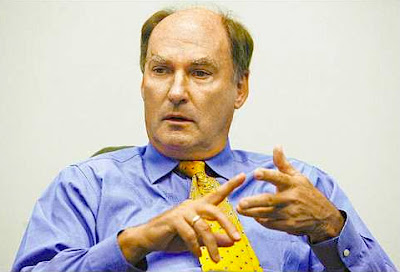 You might remember last February, when Big Ten commish Jim Delany, no doubt sore over his league's pathetic showing in the postseason, took a shot at the Southeastern Conference.

"I love speed and the SEC has great speed, especially on the defensive line, but there are appropriate balances when mixing academics and athletics," wrote Delany in a letter addressed to fans of the Big Ten and college football.

Now perhaps there is a measure of vindication for Delany. Rivals has released the results of a study of the players from the recruiting class of 2007 who did not enroll or have not yet enrolled in school for the fall.

The Big Ten lost only four recruits: two from Illinois and one each from Michigan State and Purdue.

The SEC? Half the teams in the SEC lost at least four recruits, including an amazing 10 lost recruits for Auburn. In total, the SEC lost 45 recruits.

Thanks to Kevin of We Are Penn State.
Posted by dawizofodds at 4:38 AM

If I remember correctly Florida kicked Ohio States face in with their eligible player, not with the guys who didn't make it in to school.

Let's see what Jim Harbaugh has to say about this subject.

That's a good argument. For the next Super Bowl game, I'll argue that the loser "just wasn't smart enough to beat the champion".

And this is news how?

Every year, SEC teams pull in 25, 30 or 35 recruits. You can't fit all these player under the modern scholarship cap, so it's clear these bodies are washing out, deferring, going JUCO or simply being 'disappeared' by SEC programs.

It's B.S., but until college football mandates how teams get under their 'ship limit, it's simply part of the game.

Um, couldn't you use this data as evidence that the SEC actually has *stricter* admission standards than the Big Ten?

So the "modern scholarship cap" just applies to the SEC?

Also, re: SEC having "*stricter* admission standards", I'd imagine a majority, if not all, of these kids had an issue with the NCAA Clearinghouse and not their individual institutions.

I guess that wouldn't fit?

In a perfect world, people might care about academics in big time athletics. You could play this game all day and it's a lame one...... all schools take chances on some kids who don't belong in college, all schools have kids get arrested.........there's no point to the pissing contests.

They say Southerners are ultra-quick to perceive slights. Touchy boys?