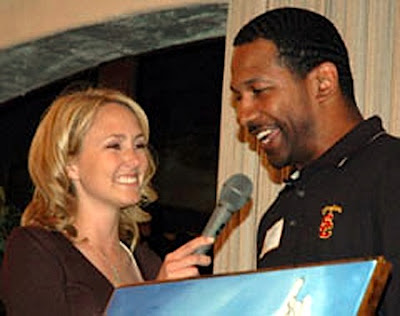 USC running backs coach Todd McNair, in his fourth season with the team, was twice convicted on charges related to mistreatment of dogs in the 1990s, according to reports.

"I really don't want to comment on something 14 years ago, and especially something I was cleared for," McNair told Gary Klein of the L.A. Times Tuesday night.

The site Bruins Nation made mention of a 1996 incident involving McNair on a post earlier Tuesday. The Times then confirmed the 1996 incident and found another similar charge brought against McNair in 1993.

McNair, a former NFL player, was charged with animal neglect in July 1993 when he was a member of the Kansas City Chiefs. He was found guilty, fined $500 and put on probation.

In March 1994, police in the New Jersey Borough of Paulsboro shot and killed a pit bull for biting and locking onto a neighborhood dog. They suspected the dog belonged to McNair, and discovered six more chained in his yard. He agreed to move them.

On March 30, 1996, McNair was charged with cruelty to animals, failure to obtain licenses and keeping animals for the purpose of fighting on his property in East Greenwich, N.J. Animal control officers found up to 22 pit bulls, including 17 adults and five puppies.

The Rocky Mountain News reported later that year that the dogs were attached to heavy automobile towing chains. Some of the dogs were found in standing water, and many were scarred. Several had fresh wounds and one had a broken leg.

Although authorities believe McNair had been training the dogs for fights, they could not prove it. In October 1996, McNair was convicted of cruelty to animals and neglect. He was ordered to pay nearly $25,000 in fines and perform eight hours of community service.

USC coach Pete Carroll told the Times he became aware of the incidents about a week ago and addressed them with McNair.

"We looked into it to make sure we knew what happened," Carroll said. "That was a long time ago."
Posted by dawizofodds at 1:26 AM

Leave it to a 'Ruin to find 14 year old charges on someone at USC to justify their own coach being a hood.

Nice write-off Carroll, "that was a long time ago." So?

I don't want that piece-of-shit coming into my house trying to snow my kids into coming to USC. Mcnair is the chief bullshitter on the staff too. Ask Jamere Holland what he thinks of McNair. Also, go ask Reggie Bush what he thinks of Mcnair - hint: it 'aint good.