A Once-Promising Career Appears Over 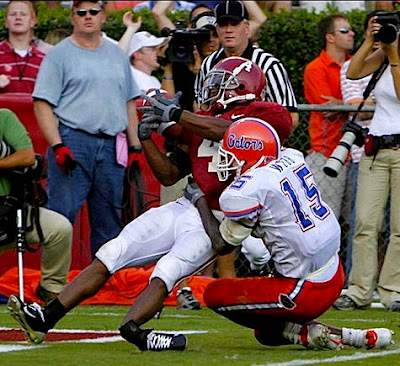 Tyrone Prothro's playing career is all but finished. The Alabama receiver, who suffered a grisly compound fracture of his left leg in a 2005 victory against Florida, has been put on a medical hardship scholarship, meaning he is ineligible to play this season.

Crimson Tide coach Nick Saban tried to soften the news regarding the fifth-year senior by saying: "We do have a plan to try to further continue [Prothro's] rehabilitation and we're hopeful that he can come back and play football someday. But our medical staff is 99.9 percent sure this is a long-term issue we're dealing with and it would be unusual for a guy to come back. But you can appeal [to the NCAA] down the road if a guy can come back."

The bottom line: Prothro's injury should have never happened. The Crimson Tide held a 31-3 lead over the Gators with under nine minutes remaining when Prothro, who should not have even been in the game, got hurt. And Alabama coach Mike Shula should have known better. In 2004, he lost quarterback Brodie Croyle to injury during a blowout against dreaded Western Carolina.

A tribute to an electrifying player:
Posted by dawizofodds at 4:05 AM

Really tragic when you consider the future potential lost. Hopefully Bama does everything they can to help him through college. They owe him more than they will ever be able to repay. I also think many players (and agents) will point to this in the future as a reason to duck out early for the NFL draft.

Sorry, but that picture is unnecessary. Particularly without a warning label. I came to your site and, frankly, could not avoid it. You really ought to think that over.

Seriously, like I said on Deadspin, I just threw up in my mouth.

Just as painful to view as Joe Theismann's injury on MNF.

i couldn't help but laugh when I looked and saw that he's wearing ankle braces. probably not the best advertising for that company..

Yes, this is a horrible photo of a horrible injury that should not have happened. However, Prothro was a great Tide playmaker and would not have been happy on the bench. It was an unfortunate and horrible accident that stole the carreer of one of the best recievers in UA history.
ROLL TIDE
P.S. The break was well above the ankle and therefore not protected by the ankle braces. If anything the fact that his ankle could not "roll" might have acccetuated the stress on the tib-fib causing the more serious injury.

Prothro was an amazing player.. period. That game was the best and worst of the season. We won a great game, but we lost a great player.