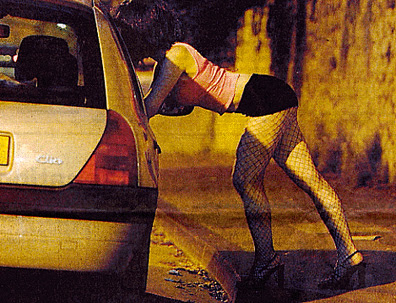 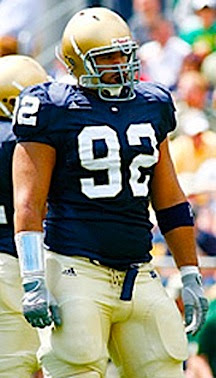 The South Bend Tribune reports that Hand was arrested and jailed last Thursday afternoon after allegedly propositioning a female police officer who was posing as a prostitute.

It was all part of a sting operation by South Bend police, and Hand and three other men fell for it. The 6-foot-3, 287-pound lineman, who is entering his junior season, was released from jail after posting a $250 bond.

Hand was expected to compete for a starting spot this fall. Soliciting a prostitute is a Class A misdemeanor.

Michael Rothstein of the Fort Wayne Journal Gazette speculates that Hand's future with the team is iffy at best:

"Our best guess is that this will be the last you see of Hand for a while. ... Add to it the embarrassing nature of the crime and he might not return at all."
Posted by dawizofodds at 3:47 AM

Was he snatching some love, or loving some snatch?

No, no. He was merely completing an assignment on abstinence for his Sociology of Deviance class.

He needed a back rub OK?

It's pretty clear that Derrell was looking for a "Hand" job!

I can guarantee you, Hand will be gone from ND no matter what...even if there are no charges filed (which is doubtful in a sting operation where things are recorded, etc.). ND is soooooo obsesses with its image that there is NO WAY they will let Hand represent them on the field, and probably even in the classroom too. ND is a like an extension of high school, Hand will leave ND because of the gossip. ND usually can hush up this stuff, but not in this case.