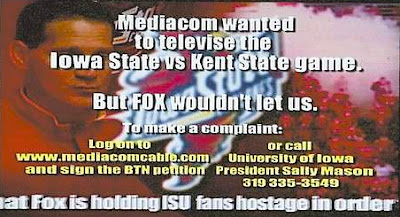 Iowa State fans were running into the streets, pitchforks in hand, to protest Thursday night. It had nothing to do with the Cyclones' 23-14 loss to Kent State. It had everything to do with the Big Ten Network and its business partner, Fox Cable Networks.

Mediacom said it was not allowed to broadcast the game because Fox, which has rights to Big 12 telecasts and had granted approval in the past, denied the request, according to the Des Moines Register. The Big Ten Network has yet to secure an agreement with Mediacom, and the cable outfit in essence implied that Fox, the Big Ten's partner, denied the request in order to put more pressure on Mediacom to agree to the Big Ten's terms.

Mediacom put the above image on the screen and provided the radio broadcast of the game. The image gave directions on how to sign an online petition and the number to University of Iowa president Sally Mason to voice complaints. Fox said Mediacom was merely raising a fuss because it didn't have exclusive rights to the telecast, which was streamed over the Internet at Cyclones.com.

We have an email into the Big Ten Network and hope to have more on this later in the day.
Posted by dawizofodds at 4:17 AM