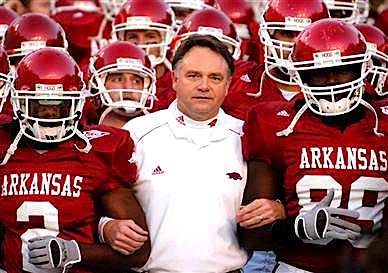 Keeping track of which coach is on the hottest seat of them all is best left to professionals. Thus we turn our attention to Coaches Hot Seat, the authority in tracking the coaching carousel.

This is one great site with a wealth of information, including a list of cost per victory. Illinois' Ron Zook, who is pulling down $1,241.750 a year, won only two games last season, meaning the Fighting Illini were on the hook for $620,875 per victory. Colorado's Dan Hawkins was the runnerup, followed by Iowa's Kirk Ferentz.

The site also maintains a list of coaching salaries, with Alabama's Nick Saban and Notre Dame's Crewcut Charlie Weis at the top and Louisiana Monroe's Charlie Weatherbie at the bottom.
Posted by dawizofodds at 3:37 AM

The most surprising salary on this list is Tulsa (a non-BCS school) paying their coach (Todd Graham) over 1 million dollars. I know it's a private school and that compensation is being paid by the boosters but it is so out of whack in terms of the marketplace. The $400-600K range is the norm for C-USA coaches. Such decisions just go to show what lengths athletic departments will go to get the brass ring which in this case is a BCS slot (a la Boise State).

looking at this, i just can't believe how underpaid lloyd carr is. i'm not even a fan of his nor the team he coaches, but when looking at some of the other coaches on the site, are you kdding me?