Arrest of UCLA Assistant Will Be Hot Topic 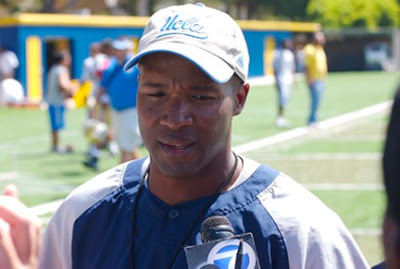 No coach will be on the hotseat quite like UCLA's Karl Dorrell on Thursday. It's Pacific 10 media day, and Dorrell have to answer questions about receivers coach Eric Scott, who was arrested Tuesday on suspicion of felony burglary.

Scott and two other men, Jesus DeAlba and Timothy Williams, were arrested after deputies received a 911 call from a neighbor about a possible burglary at a home in Norwalk.

Now this could be one big misunderstanding, according to the L.A. Daily News, which reported that DeAlba's cousin lives at the house. The investigation is moving slowly because a resident of the house could not be located.

Even if Scott is cleared, there appears to be trouble for Dorrell. Scott, it turns out, had been sentenced for three other crimes before being hired in March. And Dorrell acknowledged in a statement that the school knew about Scott's criminal background when it hired him.

You'll be able to lock into a live stream of Dorrell's press conference, scheduled for 11:15 a.m. (Pacific) at the Pac-10 site. The link also provides times for other press conferences by league coaches.
Posted by dawizofodds at 1:57 AM