A Prince of a Nonconference Schedule 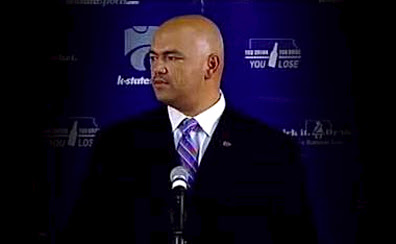 Bill Snyder's creampuff nonconference schedules at Kansas State were the stuff of legends. Those days are gone in Manhattan. Coach Ron Prince is eagerly scheduling quality nonconference opponents, including an opener this fall at Auburn and a season-ending game at Fresno State.

"The Auburn game will be covered all over the country and Fresno will be at the top of their game this season," Prince said. "From a recruiting standpoint and getting out message about Kansas State and having our logo behind those talking heads, that's what it's all about."

Many of Prince's Big 12 counterparts have a different idea when it comes to scheduling. Granted, Nebraska and Colorado have challenging nonconference schedules, but teams such as Texas A&M, Iowa State and Kansas are — for the most part — taking the creampuff route.
Posted by dawizofodds at 12:03 AM