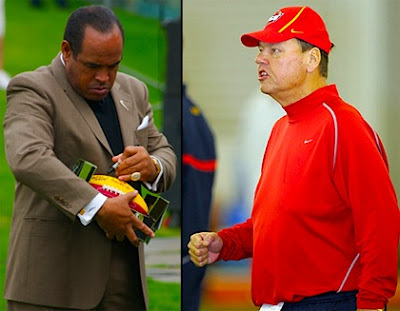 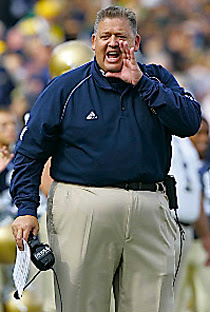 Why does gastric-bypass surgery work for some and not for others? Former USC tailback Anthony Davis, top left, saw his weight balloon to 300 pounds. On March 11, 2006, he had the surgery, which was broadcast over the Internet. On April 7 of this year, a noticeably slimmer Davis was signing autographs at the USC spring game.

Iowa State defensive coordinator Wayne Bolt's results have been even more dramatic. Bolt, top right, had the surgery just over a year ago after his weight hit 500 pounds. He has lost over 250 pounds. Bolt told the Wiz that "the surgery was the best thing I have ever done. I have lost 253 pounds and feel great."

Then there is Notre Dame coach Charlie Weis, left, who is due in a Massachusetts court in less than three months for a retrial of his medical malpractice lawsuit against two physicians Weis says botched his 2002 gastric-bypass operation.

Weis said he decided to undergo the surgery after his weight ballooned to around 350 pounds. After nearly dying after the risky procedure, Weis said he lost more than 100 pounds, only to regain 50 pounds. Speculation in South Bend is that Weis has since regained nearly all of the 100 pounds.