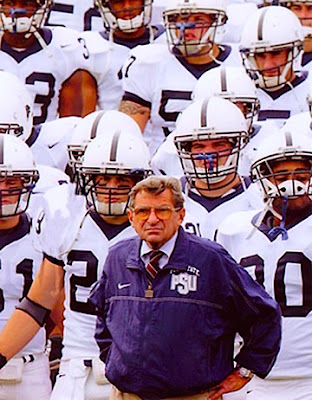 State College police are examining an anonymous letter that was slipped under the door of the residents of an apartment where an assault occurred last weekend that reportedly involves several members of the Penn State team.

"I want you to realize that you have the power now to press charges or drop them. Legally, the ball is in your hands. However, you can be a hero in this situation and forgive the attackers for what they have done. There is no question that what they did was wrong, and now you can show them the mercy they failed to show you. This isn't about payback, this is about doing what is good for everyone," states the letter, which is signed "The voice of the Penn State student body."

"We're very concerned about the letter," Penn State assistant vice president Bill Mahon told the Centre Daily Times. "It seems to me to be an attempt to intimidate the victim of a crime."

The five-paragraph letter also states that, "Joe Paterno is almost inevitably on his way out soon and he probably does not want to deal with this issue during his last years." The letter listed Penn State athletic director Tim Curley's contact information and encouraged the recipients to set up a meeting with him to mediate a solution. Curley declined comment.

Penn State message boards have been ablaze over the incident and many posters have been critical of the individuals who went to the police after the assault. According to the Daily Collegian, the names and university email addresses of two students involved with the investigation were posted on one site only to be removed a few hours later.

Paterno addressed the team about the incident Wednesday but has yet to make a public comment. State College chief of police Tom King estimates it would be at least seven to 10 days before official action will be taken.

You can read the letter by clicking here. Thanks to Kevin of We Are Penn State.
Posted by dawizofodds at 2:20 AM