Another Bizarre Twist at Arkansas 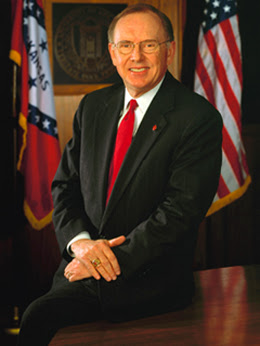 After a week of calm, things have sparked up again at Arkansas, where a man has filed a lawsuit against John White, right, the chancellor of the Fayetteville campus, and Alan Sugg, the president of the University of Arkansas.

In what is being called a taxpayer action, John David Terry alleges that White and Sugg failed to properly investigate two emails sent in December by Teresa Prewett of Little Rock, one to Mitch Mustain, the other to Democrat-Gazette sports editor Wally Hall.

Prewett is a Razorback booster and friend of Houston Nutt, and critics of the coach have alleged that he was behind Prewett's emails, which were critical of Mustain. The quarterback announced last week that he was transferring to USC. Prewett has since apologized for the emails.

You can download the 41-page legal document, which is a pdf file titled "Shock and Awe," by clicking here.
Posted by dawizofodds at 4:02 AM

These aren't Hog fans dude, these are petty, vindictive people who hate Houston Nutt so much that they could care less about any damage they may do to the program.

It makes me sick.

They are people that give a damn about the UA and want them to just "do right."

The two attorneys who filed this suit are heavyweights. Their involvement alone likely has the UofA worried.

My mommy once told me, "Two wrongs don't make a right."

Nutt led them to 10 wins and an SEC West title last season, and yet they're crucifying the guy. What would they have done if Hogs had gone 5-7?

Alert to Hogs fans: This ain't the 1960s anymore. (You know, the last time you truly were relevant in football.)