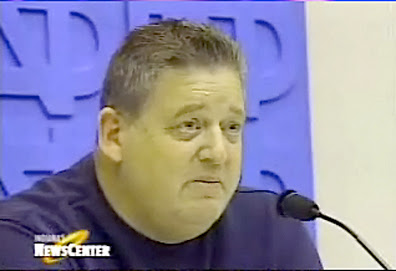 Year Three of the Crewcut Charlie Weis experience kicked off Wednesday in South Bend, and the No. 1 question facing the big guy was the health of quarterback Jimmy Clausen.

Teddy Greenstein of the Chicago Tribune reported that Weis interrupted a questioner to say Clausen is "full go, too, contrary to recent reports. ... By the way, just so we can clear that one up, the only one who will answer for the health of our players will be me. So next time, we can just keep it that way."

Reporters later headed to the Loftus Sports Center to catch a glimpse of practice. Michael Rothstein of the Fort Wayne Journal Gazette reported that "when the media was allowed in, most flocked right to where Clausen was standing and began snapping photographs and filming. That didn't even happen when Brady Quinn was still around."

How did Clausen look throwing the ball? According to the Chicago Sun-Times' Vaughn McClure, who reported that Clausen has an injured throwing arm, the quarterback only threw briefly during 20 minutes of light drills that were open to the press. Clausen will not be made available to the media during spring practice.

Weis did little to lower expectations in South Bend, reported Pete DiPrimio of the Fort Wayne News-Sentinel, even though the Fighting Irish return only three starters on offense. "Tradition never graduates," Weis said.

Glad to hear the Irish will continue to get smoked by top tier competition and lose their bowl game.

Bruce, is it tough to have a sports life where you have to balance pathetically hating someone else with supporting your own team?

I'm glad Charlie isn't trying to weasel out by using the "rebuilding year" crap. This year's team may struggle a little, but I'm confident they'll do well, if not this year, then certainly the next few.

always nice to hear those confident words, however ND will get it's head handed to it against any of the good teams that they play this year.......0-5 start is possible.