Pickens Again at Center of Controversy 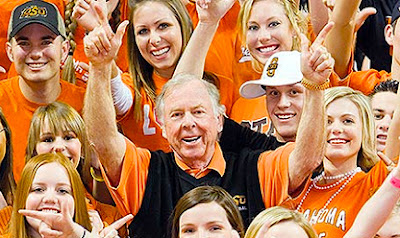 Oklahoma State, in a move that will likely change the landscape of fund raising for "amateur" athletics, has announced a "Gift of a Lifetime" program that will generate $280 million in life insurance commitments.

Here's how it works: Twenty-eight individuals in age from 65 to 85 have been selected. They are under no financial obligation and only needed to pass a physical exam. OSU Athletics, Inc. took out a $20 million loan to pay the premiums, and each time an individual in the program dies, Oklahoma State will be paid $10 million. When all 28 have died, Oklahoma State will have been paid $280 million.

Yes, Oklahoma State owns the proud distinction of being the first NCAA program to use life insurance policies as a fund raiser. Texas Tech and Texas reportedly are already making inquiries about following Oklahoma State's lead.

The insurance company also plans to profit. It will take the estimated $357,000 premium per individual and invest it to where it becomes worth more than the $10 million policy.

We're not an expert in this type of money making, but considering that the NCAA's tax-exempt status is under question, it now appears we can charge NCAA president Myles Brand with loss of institutional control.

All this is the brainchild of T. Boone Pickens, the most powerful booster in college athletics. Pickens donated $165 million to Oklahoma State on Dec. 30, 2005, and the New York Times later reported that the money spent less than an hour in a university charity account before it was transferred to a hedge fund that is controlled by — you guessed it — Pickens. In six months, Pickens parlayed another $50 million onto the $165 million.

Marcus Owens, a lawyer who formerly headed the division of the I.R.S. that oversees tax-exempt groups, told the Times: "Sadly, it's another case of a rich man manipulating charity for his own benefit."

Since Pickens' $165 million "gift," several maneuvers by the university have ticked off fans. Early last year, the university announced plans to use eminent domain to take an estimated 41 homes north of campus to make space for an athletic village. A group started the website Boone State in an attempt to stop the bullying tactics, but that effort failed. And ticket prices for football games went up 27% last year to help raise the athletic operating budget by at least $3 million, a move that seemingly passed the revenue demand onto the rank and file.

Last June, Pickens' son, Michael, was charged with burglary after he was found hiding under a desk inside the Housatonic Meadows Fly Shop in Cornwall, Conn., several hours after closing. A year earlier, Michael Pickens was indicted on federal securities fraud allegations in New York. The prosecution of that case is still pending (some registration).
Posted by dawizofodds at 4:05 AM

This tactic is common in business. The Wall Street Journal ran an article several years ago about Wal Mart doing this with employees and some questioned why this was allowed. The culprit here is the tax code that rewards this behavior and the lawyers that look for these unproductive dodges.
The Business of College Football

Give me a break, this is America where it pays to THINK. He figured a way to benefit the school and make money himself. Congratulations, when someone does what the prinicpals of this country is founded on free enterprise, then we always have to critize. Why not admit it he did what it takes up front. At least it was not behind closed dorrs like most major atlethic programs. More power to him and the 28 souls who have realized, yes we're gonna die let's make some good out of it.

Why does everyone feel like this is soo wrong? If the alums are fine with this concept (leaving one last gift) then why should they be criticized? This is simply a way for the alumni to maximize their unused capacity for Life Insurance towards a good cause! It is the donor's choice to participate. They have obviously been educated on the mechanics of this strategy. In my opinion, every other college out there should take advantage of this opportunity! Boone Pickens should be praised for implementing the "Gift of a Lifetime." What a Genius!