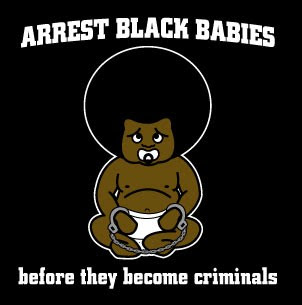 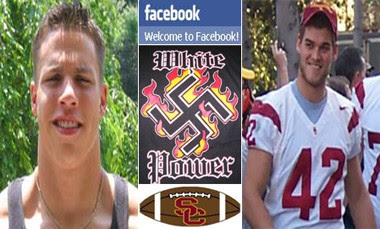 After much debate, we decided to post these two images that are said to be from the racist Facebook group that was created by USC linebacker Clay Matthews. The images appeared on Sports By Brooks this weekend. Trojan players David Buehler, Brian Cushing, Dan Deckas and Dallas Sartz — all white — also were named as members of the group.

Sports By Brooks points out that the graphic of a black baby in handcuffs actually came from a T-shirt that was the focus of a 2005 story on Black America Web.

USC announced that none of the players involved will be punished. Michael Jackson, USC's vice president of student affairs, told the L.A. Times: "While the group was evidently created as an offshoot to joking between races among teammates at USC, this joke was clearly taken to an improper length."

As stated Friday, we were disturbed the players were not disciplined. After seeing the images, we are stunned by USC's no-discipline stance.
Posted by dawizofodds at 3:58 AM

Not stunned they weren't punished. This is a terrible, lazy effort at postmodern humor in the mold of 'Family Guy,' a failed lampoon, which is harmless except for being not funny. It's about ten times as likely, rather than this group being actually racist, that it thinks racism, 'white power' and locking up black babies are such absurd ideas that the irony is evident at face value. Whether or not it actually is probably depends on your age and experience with racism - being just past college age, I can say this is a pretty common strain of lowbrow humor these days among college kids with no real experience of racism. But any joke that needs this much explanation is just a crappy, crappy joke and deserves heaps of scorn for veering into dangerous territory with no actual means of diffusing the ideas it means to mock. The same criticism should probably also be directed at the latest episode of 'South Park,' which was a mess of misguided racial parody. Hopefully people will get sick enough of trying to make fun of racism soon that we can move on to humor that is actually, like, funny.

The University can't punish them and call themselves an institution of higher education. Its called the 1st amendment, and if USC is a publicly funded institution then there is nothing they can do. Their viewpoints might be absurd, but the freedom of speech means that anyone with any view point is free to speak, not just those opinions that we agree with. Its a sad but necessary evil of the liberty the 1st Amendment gives us.

One question, if it is a first amendment right, then one must question if this was harmful. If potentially harmful to someone else then this could be an exception and not be upheld by the first amendment. (plus, a student contract signed by students at enrollment at a university and by enrolling in classes usually would discipline students who use such acts which include such images and groups as hurtful to other races, your collegues, and professors)

Anonymous at 9:26am commented: "The University can't punish them and call themselves an institution of higher education. Its called the 1st amendment, and if USC is a publicly funded institution then there is nothing they can do."

USC is a private institution. UCLA is a state-funded school. It's unfortunate, but not surprising that USC doesn't have to do anything simply because they are a private school.

To answer smq's comments, society today has become desensitized to issues such as these, with Family Guy and South Park. The creators of both shows are making a statement that no one is above reproach and is open to ridicule, regardless of racial, socioeconomic, and religious differences.

They sure can be punished. First of all, the players of the USC football team represent their teams at all times, and they must act accordingly. Why do you think someone who gets in trouble off campus can be kicked off the team and lose their scholarship?

Secondly, everyone who has ever gotten in trouble in college knows that your rights mean crap once you step onto campus. They can do whatever the hell they feel like.

Why is it up to the football team to punish these people for something they put on their facebook site?

Racism aside, is this some kind of thought police thing? Did these players promote this message while on the field, or in a classroom? OR did they merely do it on their facebook site?

What is the football team's policy on players posting their own thoughts on their own private property (facebook site)? Did the players sign a contract that says "I will not think not promote racist views on any of my private property"?

I am also pointing out that it shouldnt necessarily be the job of the FOOTBALL TEAM to punish the players for what they did on their own time and on their own property.

It is the responsibility of the fans and of their family and friends to punish and/or chastise them.

I suppose that next up, we should sanction and fire any government employee who puts a "no more war" banner on their myspace page!

They sure can be punished. First of all, the players of the USC football team represent their teams at all times, and they must act accordingly. Why do you think someone who gets in trouble off campus can be kicked off the team and lose their scholarship?

LOL!!!! Yea buddy, and you represent the United States (or whatever country you are a citizen of) at all times, and therefore you must tow the majority line 24/7!

When did they ever sign anything that says "I represent my team at all times and therefore must not excercise free expression of thought anywhere, at any time, even if on my private property during my private time"???

Secondly, everyone who has ever gotten in trouble in college knows that your rights mean crap once you step onto campus.

According to the laws of the US, they shouldnt. And this is one instance that they dont. I dont wanna give up my right to my life liberty and pursuit of happiness just because I fucking enrolled at a university.

They can do whatever the hell they feel like.

Well then it looks like you defeated your own argument, since they didnt "feel" like punishing these players for what they did in their own little slice of the world. Obviously youre just pissed because the University didnt "feel" like committing the gestapo actions that you want them to commit.