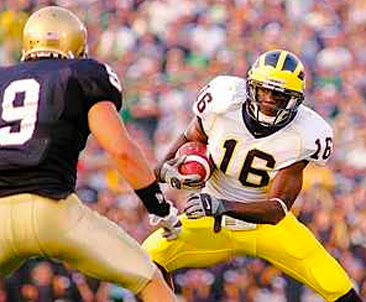 Indications are that Michigan coach Lloyd Carr has booted No. 2 receiver Adrian Arrington from the team. Arrington, along with tight end Carson Butler and defensive limeman Eugene Germany, will not be with the Wolverines when they begin spring drills Saturday.

Carr said little about the status of the players other than to indicate they are not injured. Carr said the return of the players in the fall is "possible but not probable."

However, a media release about returning starters listed Butler but not Arrington, leading to speculation the talented receiver is no longer a member of the team.

Arrington has had run-ins with Carr. Last year he was charged with domestic violence, a case that was dismissed.

Thanks to Kevin of We Are Penn State.
Posted by dawizofodds at 12:25 AM